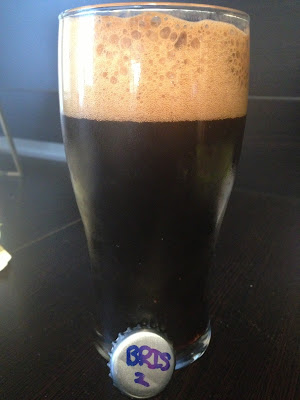 What I have today is Grassland's second edition of their Black Rose "Standard" Imperial Stout--Standard meaning this is (unfortunately) not the bourbon aged version that will be released as a specialty beer.

BRSIS was brewed on November of 2012 and my tasting notes are from when I opened the bottle on April 1st. As I mention below in my review, this beer will get better with age but I just couldn't holdout any longer. I received the bottle in mid-February and it's been taunting me from my fridge ever since. 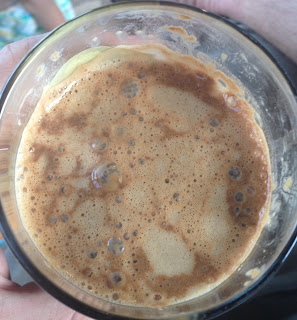 Appearance: Holy black, Batman. With the exception of the tannish-brown head and lacing, this beer is as black as they come. As you can see from the picture above, there is a really cool marble effect on the head of the beer that makes me think I am about to dive into a carmel-chocolate sundae of sorts.

Aroma: chocolate, yeast, and malt. Not a ton of strong aromas coming from this beer, which is a bit surprising.

Taste: The booze really comes forward on the front of the palate and follows through with a dry finish. Some burnt malt flavors linger on the tongue. Not nearly as chocolatey as I expected based on appearance and nose. As the beer warmed, I got a ton of vanilla and dark fruit flavors that I completely missed on the first four or five sips. 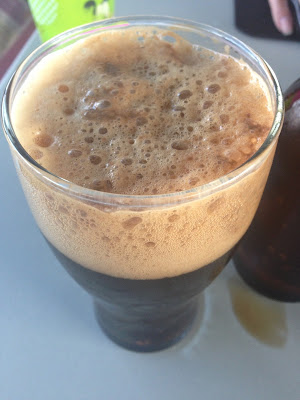 Mouthfeel: Definitely full body but there's plenty of carbonation to help this one seem lighter.

Overall: I'm glad I let this beer sit for a while because it became a completely different beer as it approached room temperature. Still, I don't think this beer is as complex as Grasslands is shooting for. I think the booze needs to mellow and allow the vanilla and roasted malts to play a bigger role. Carbonation really dies off at room temperature (which I like). Really smooth and enjoyable- transcends into a completely new beer after sitting for about 15 minutes.

Special thanks to Gabe Grass for sharing this with me. Can't wait to try the bourbon BRIS!
at 11:41 AM