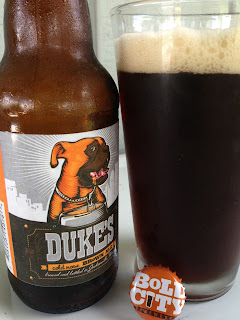 A year ago, when I was scoping out Jacksonville as my potential next place of residence, Duke's Cold Nose Brown Ale was the first local beer I tried. I was at dinner and asked my waiter what he recommended that was local. Without hesitation, he brought me a Dukes and shared a little bit about Bold City Brewing. I was intrigued and glad to see so much pride for a local brew.

A year later, I have finally decided it's time to post a review. This is my second review of a Bold City Beer. I encourage you to also read my review of Killer Whale, as I give additional context of Bold City's influence on the Jax beer scene.

Appearance: Brown with red tints. Cloudy body with a quarter-inch head that perseveres as you drink the beer.

Aroma: Chocolate malt is first and foremost present on the nose. There's also a nuttiness that's expected with this style. Toasted grain as well.

Taste: Nuts and caramel are the two most predominant flavors. As the beer passed through the palate, I taste a watered-down coffee flavor with a sweet and chocolaty finish.The flavors are overall pretty mild and could be a great gateway craft beer for someone who's used to drinking Bud, Miller, Coors, or piss. 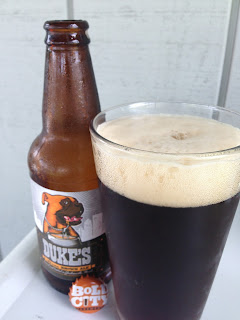 Don't get me wrong, there's nothing wrong with a light gateway craft beer. There's nothing extreme or overly remarkable about Dukes, but that's not a bad thing. I suspect Bold City has been able to "convert" a lot of beer drinkers over the past few years, and no doubt Dukes has played a huge role in that.

Overall, Dukes has found its niche in Jacksonville and has a pretty large following. Personally, I am not a huge fan, but like I said before, I appreciate and respect what this beer has accomplished and represented for the craft beer community in Jacksonville. Bold City is Jacksonville's first craft brewery. I believe Dukes, in some ways, has paved the way for the more intense and experimental brews in Jacksonville.

Beyond the flavor, my biggest issue with this beer is with the packaging and price. The only way to purchase Dukes in the store is by buying the 12 pack ($16.99). For me, the packaging is the main reason I don't drink Dukes more often. I honestly don't want 12 bottles of it, and I certainly don't want to seventeen bucks! Not when I can buy two separate (and different) 6 packs for the same price. I'm not sure why Bold City doesn't produce more of their beers in 6 packs (especially their flagship), but I think it's definitely holding people like me back from buying more of their product.