Shock Top: Less than Shocking on the Palate! 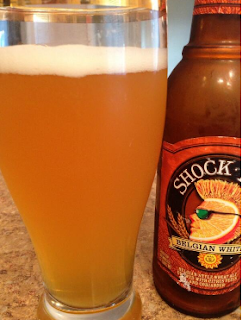 Preface: If you're reading this and you're a big fan of Shock Top, you might feel a bit defensive at some points of my article. You might also be tempted to think of me as a "beer snob."This is not about beer snobbery. If someone is choosing between a Bud Light or a Shock Top, I suppose I would advise someone to go with the Shock Top (assuming there's not spoiled milk, hose water, or human urine to drink instead). I am not a snob. I just prefer good beer.

I am constantly amazed by how many folks still don't know that Shock Top is not a craft beer. In fact, I am even more amazed by the amount of people who argue with me when I tell them Shock Top is nothing more than a product created with a crafty label to disguise its true origin: Anheuser Busch.

Regardless of the slight nausea I feel every time I think about a Bud product, I decided I needed to take one for the team and drink a whole Shock Top and provide an objective review.

The night I cracked this open, I tipped off my Twitter followers with a subtle hint of how I felt about Shock Top. 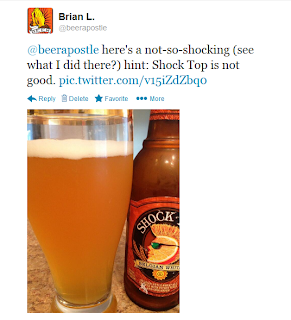 Aroma: I can definitely pick up on the orange flavoring (I would be shocked if this was brewed with real fruit). The aroma is thick and there's no denying the flavor profile I am about to taste.

Taste: As expected, lots of orange flavoring. Slight Belgian spice, finished by a copper/metallic after-taste. Lots of carbonation--drinks more like an orange soda than a beer.

Mouthfeel: Light body. Fairly watery, but the carbonation helps to give this beer a bit more presence in the mouth.

Overall: I think I let the cat out of the bag with my initial paragraph, but I am just not a fan. Sure, my opinion is tainted and, admittedly, even if this was the most amazing beer in the world, I would have gone into this tasting with a negative mindset. Still, I just don't know why you would settle for this when there are MUCH BETTER BEERS to be had.

Next time you're out and in the mood for a citrusy Belgian similar to Shock Top or Blue Moon, ask your server for one of these beers:
Moral of the story: If Shock Top is a beer you really like, then get excited because you're about to be blown away with some of these other beers. Get out there and expand your wheat beer horizon!