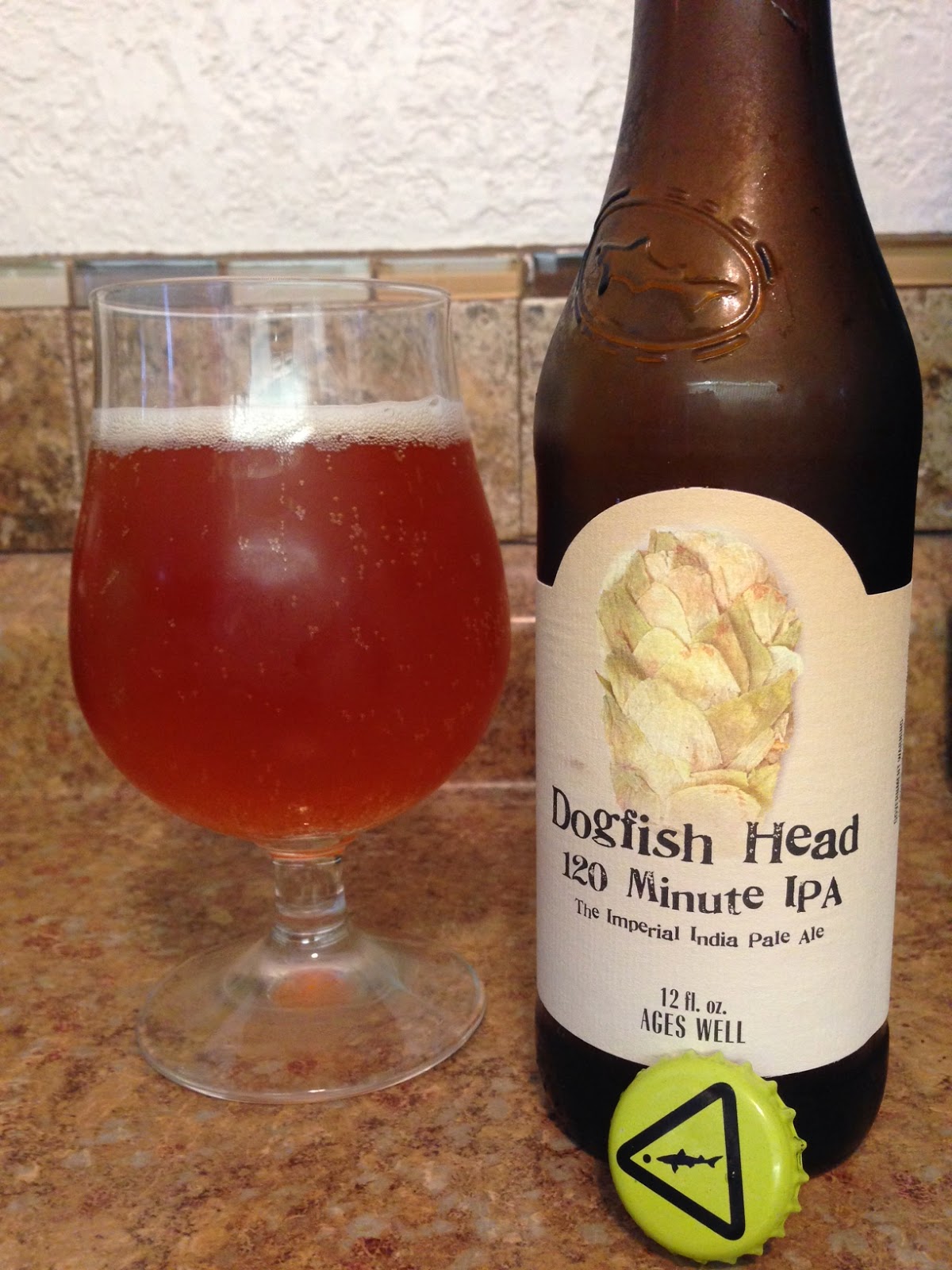 I've had 120 Minute IPA a few times, but never fresh. Until now, the only times I have ever come across a bottle of this is during a bottle share when a friend has gone deep into the back of his cellar to pull out a finely aged 120. I've heard stories of how this beer tastes fresh, and have been eager to jump on the opportunity to experience it myself.

This particular bottle has a date of 3/19/14, making it about 5 weeks fresh. I expect the hop characteristics to be much more present then in the cellared versions I've tried in the past.

And before I move onto the actual review, I also want to give some much-deserved attention to what this beer actually is. I suspect some of you, may not be fully up-to-speed on the context of 120 Minute IPA.

Dogfish Head first released this mammoth of a beer in 2003. It's been labeled as "The Holy Grail" of IPAs, and that's due to two things: The insane amount of hops that go into this beer and the amount of alcohol it contains. 120 Minute IPA is continuously hopped for two hours (hence the name), is then dry-hopped in the fermenter for 30 days, and, as if that's not enough, DFH then ages the beer on whole-leaf hops for another month. In other words, there's A LOT of hops that go into making a batch of 120! 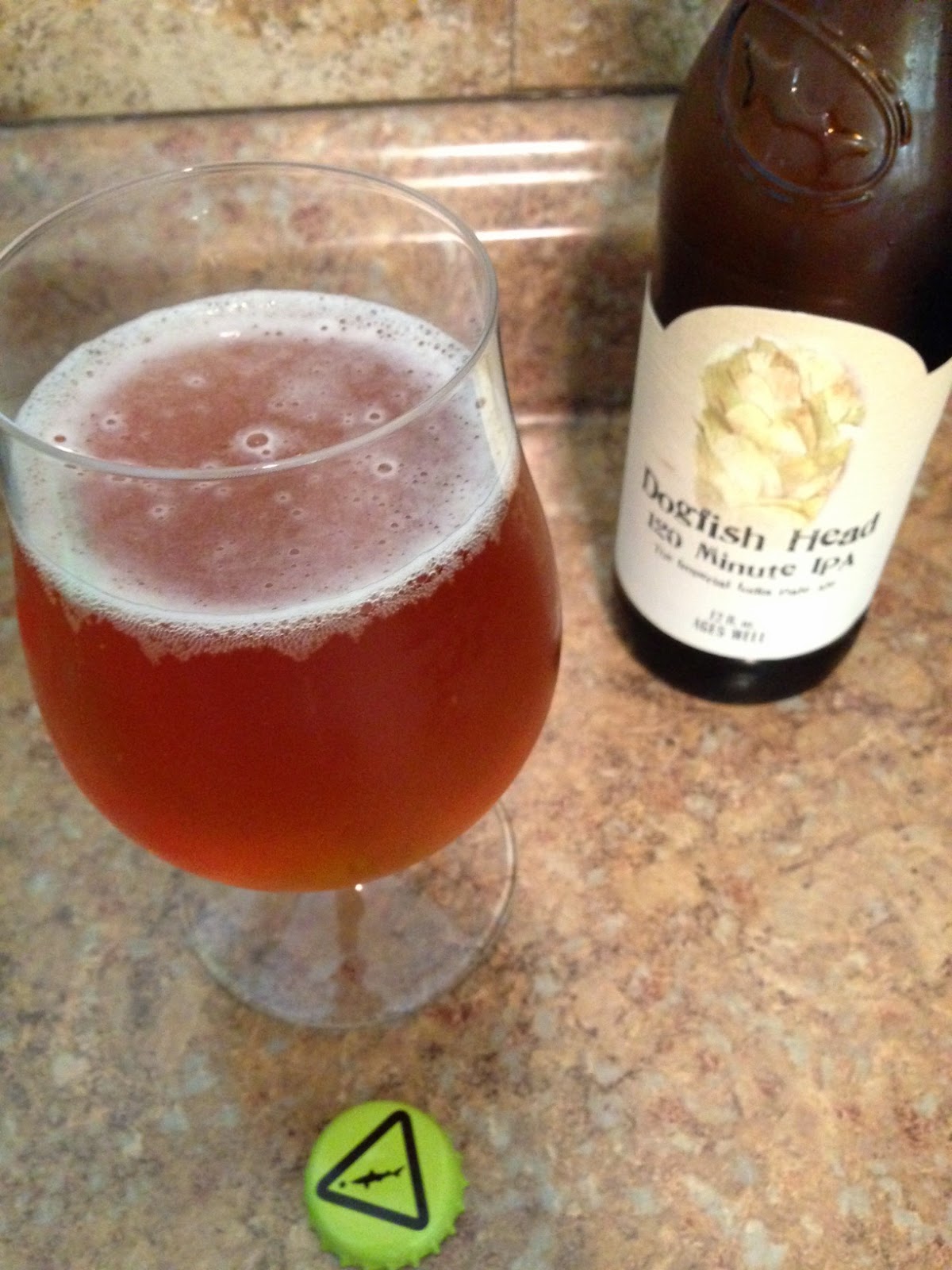 Appearance: The bottle is pretty unassuming, aside from the cap that dons a "caution" symbol, signaling its contents to be something special. 120 Minute IPA pours a beautiful caramel color with shades of amber. The head is minimal and fades quickly.

Aroma: Liquor aromas mixed with floral hops dominate the nose. It's tough to pick up anything else as the alcohol is quite strong and in the forefront of the scents.

Taste: The first thing that registers is alcohol, and lots of it! It's almost like drinking a hopped cocktail of sorts. 120 initially hits the palate with a lot of heat and then finishes with the floral and bitter notes from the hops. There's also a wine characteristic to this beer that comes from the boozy bite and heavier body. Allow the flavors to linger a bit on the tongue and you'll be able to pick up some of the malt sweetness, albeit a subtle sweetness.

As this beer warms, it feels more like I am sipping on a sweet whiskey. The initial alcohol bite subsides and allows some of the maltier notes to come forward. I could sip on this all night!

Mouth: There's a good level of carbonation, but that doesn't stop this beer from being big bodied and heavy. The texture is generally smooth and slightly creamy, though it's not nearly as creamy as it will be once it ages a while. I've had 120 at the 3 year mark, which is about when this Double IPA turns into a smooth and rich barleywine.

Overall: Very different from my past experiences with 120. As I mentioned, my only experiences with 120 have come after it has aged for a few years. So, all I have known about this beer was how richly sweet, flavorful, and heavy it can get. Fresh, this beer is a completely different beast. The hops and alcohol are incredibly strong, and yet, it's still a delicious beer. And when I say that the hops are strong, I don't mean they're strong in the same way Palate Wrecker is strong. The hop characteristic in 120 are fresh and inviting. The citrus and floral flavors are quite enjoyable, and they, in no way, dominate this beer. As I've mentioned, the alcohol and subtle sweetness help to bring some semblance of balance, especially as the beer nears room temperature.

Proceed with caution, but do so with high expectations that won't leave you disappointed. I'm so glad I was able to try this fresh, and even gladder I bought a few extras to store away in my cellar, where they'll stay until the year 2017...at least. 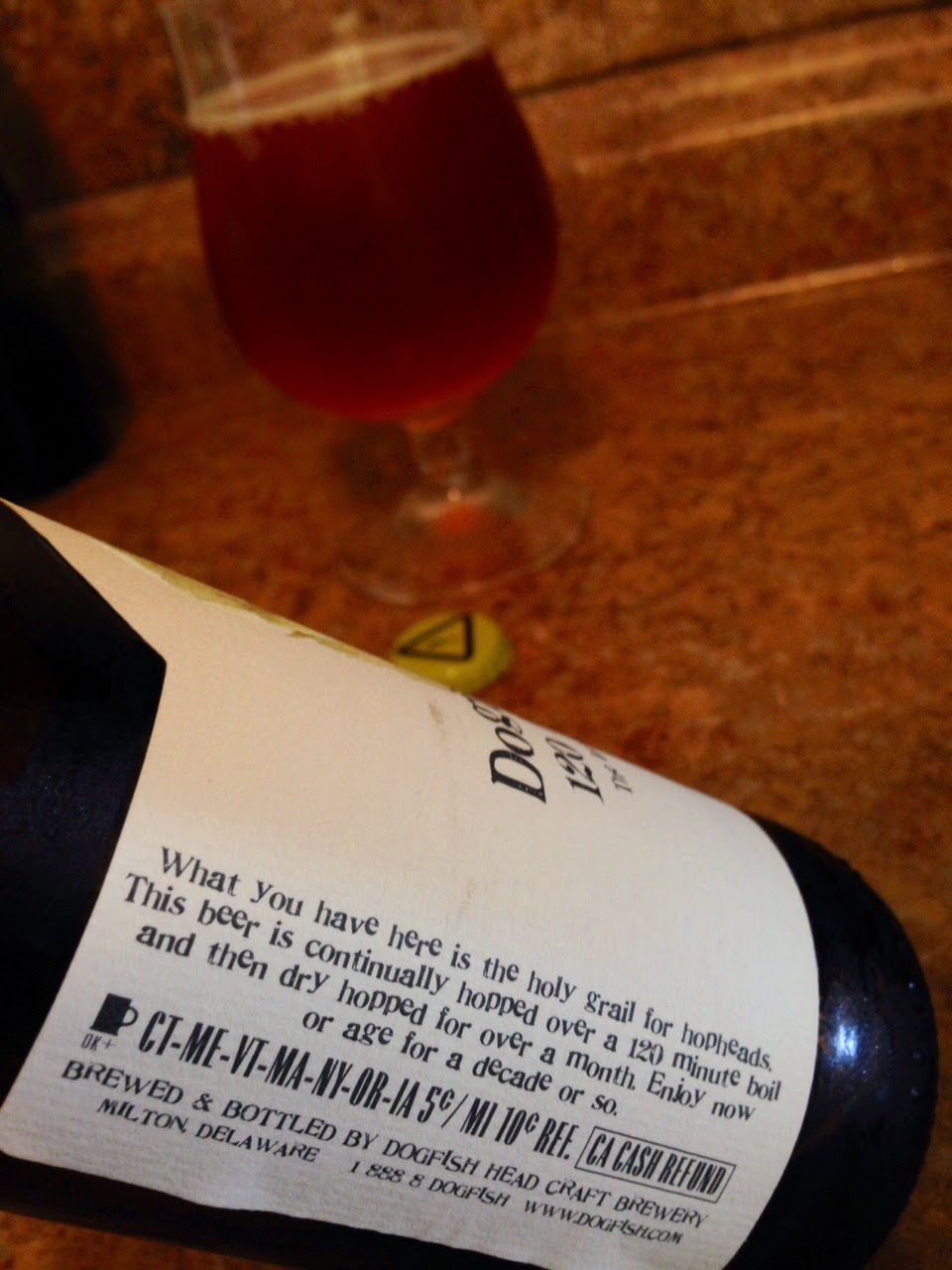