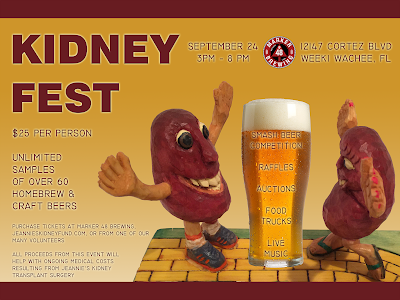 Kidney Fest, a Homebrew & Craft Beer fundraiser to benefit Jeannie's Kidney Fund, will take place this Saturday (9/24) from 3-8pm at Marker 48 Brewing in Weeki Wachee, FL. This is the third charity beer fest in two years to contribute to Jeannie's Kidney Fund.
Tickets are $25 prior to the event ($30 at the door) and include unlimited samples of over 60 different homebrew & craft beers. To purchase tickets visit jeannieskidneyfund.com, or stop into Marker 48.
This year's festival includes a SMaSH (Single Malt, Single Hop) beer competition in which participating brewers will have their SMaSH concoctions judged by a panel of judges (of which I have the pleasure of being a part) and the winning beer will be awarded a hand-carved wooden trophy signifying their smashing success (see image below)! 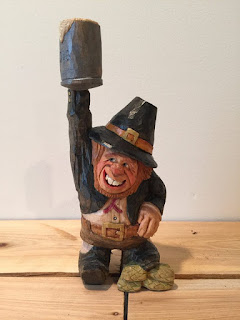 The festival will also include raffle prizes, auctions, food trucks, and live music!
All proceeds from this event will help with ongoing medical costs resulting from Jeannie's kidney transplant surgery.

Join in on the discussion and receive updates on the beers and special auction items by viewing the Facebook Event Page for Kidney Fest. 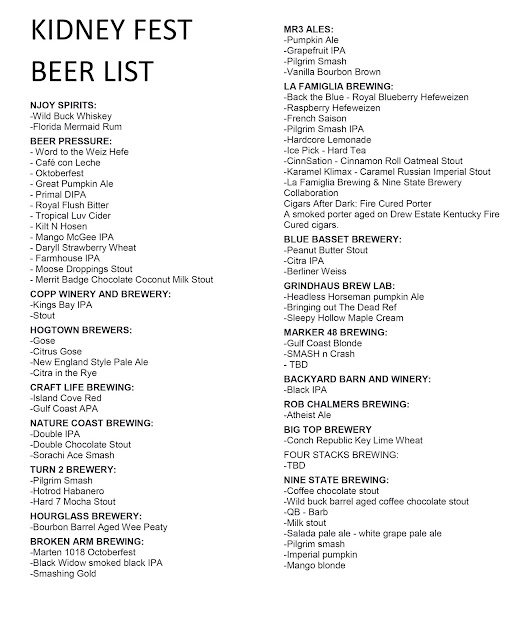 Jeannie was diagnosed with End Stage Renal Disease aka Kidney Failure and was on daily dialysis for 9 hours a day, every day.

While waiting for a transplant donor, Jeannie's son,Eric, bravely signed up to donate his kidney to another family in exchange for one given to Jeannie. Thankfully, Jeannie received a successful transplant on March 4th, 2015!

This fund for Jeannie is established to help offset some of the expenses incurred with the transplant procedure and lifelong recovery.
at 4:44 PM