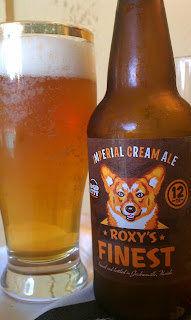 Roxy's Finest Imperial Cream Ale was released in four packs of 12 ounce bottles. This is a treat for locals because the brewery mainly sells only bombers and 12 packs. So this smaller package is a welcomed sight for people who don't want to commit to a 12-pack or are scared off by bombers.

Roxy's Finest pours a nice and hazy golden hue. The aroma is lacking--there's just not much there. There's a faint smell of yeast and alcohol, but it's not all that arousing. 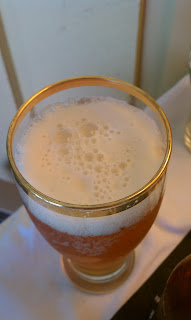 The taste is full of booze. It actually took me a few sips to distinguish anything beyond the mildly sweet alcohol flavor. Once I was able to move past the booze, I got hints of banana, yeast, and malt, but the flavor profile is pretty one-dimensional and way too boozy. The mouthfeel is quite syrupy, which is to be expected with a cream ale. Unfortunately, the taste isn't desirable enough for me to want my mouth coated with syrup of this flavor.

This imperial cream ale is pretty much a stronger version of their Killer Whale Cream Ale. The profiles are nearly identical; the imperial simply has more of everything. So, if you are a fan of Killer Whale, you'll probably enjoy this. Sadly, I am not a fan of either.

I appreciate what Bold City has attempted with Roxy's Finest Imperial Cream Ale. I like that they are venturing out and experimenting with what they already have. And despite my tasting notes, I will never tell a brewery to shy away from high gravity beers. Bold City is certainly going in the right direction; this one just didn't do it for me. Regardless, Bold City has become a local staple and I look forward to trying whatever concoctions they come up with in the future.
at 2:44 PM