I spent the greater part of last week in Memphis on business. If there is anything good about traveling for work, it's that I get to explore the local scene and sample new beers from breweries I can't normally access from my home in Florida.

One of the best things about flying out of  JAX is the almost-always-guaranteed connecting flight out of Atlanta. Why is having a layover a good thing? three words: Sweetwater Draft House. It's become a mandatory stop for me in the Atlanta airport and has single-handedly made flying fun again.
On this particular trip, my intention was to drink local beers that were Memphis or Tennessee born. My consumption was mostly limited to two breweries: Ghost River Brewing (Memphis, TN) and Yazoo Brewing Co. (Nashville, TN). 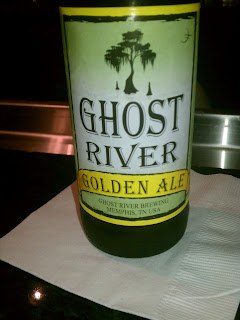 After checking in to the hotel, my next natural stop was the hotel bar and see what local craft beer options there were. I asked the bartender to serve me something local and preferably from Memphis. He quickly responded with, "Ghost River" and served me this Golden Ale.

Honestly, this wasn't anything special. Basically a local version Budweiser. It's a light bodied, light flavored beer that's heavy on the carbonation and drinkability. The beer had a profound bread profile that tasted worse as the beer warmed.

I do want to acknowledge that I am sure Ghost River has more to offer than this adjunct knockoff. Unfortunately, I was limited by the hotel's selection and this was the only GR brew they had in stock. I would definitely like to go back and check out some of their other beers.

Beale Street was the obvious place to check out--which I did--but I found myself hanging out at The Flying Saucer, just a short block away from Beale. As a current UFO Club member, I am no stranger to The Flying Saucer. While I am not even close to the 200 beers needed to have my name forever enshrined on a saucer of my own, I do enjoy the process of swiping my member's card and ordering my beers from the long list of beers I have not yet tasted at any of their locations.

The following day, after a full day of training sessions, meetings, and networking, I was eager to sample some more beer. This is where Flying Saucer came to the rescue. A quick 5 minute trolley ride from the hotel is all it took. I used my handy dandy UFO club card to scan the hundreds of beers Flying Saucer had to offer and found Yazoo Brewing Company. I had heard plenty about Yazoo Sue and hoped to be able to try it but was disappointed to see that it wasn't currently available. Instead, I ordered a Rye Saison and Hop Project. 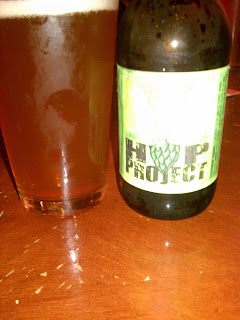 I definitely enjoyed both beers from Yazoo and would have loved to try more. Rye Saison was a tasteful blend of rye spices and citrus fruits and Belgian sugars. My only complaint is that I would have enjoyed more rye and less saison, but that's just a personal preference.

Hop Project is a solid IPA that had a very strong hopped profile. I really enjoyed this beer and could see this being a go-to for me if I lived in TN.

Overall, I left with a great impression of Yazoo and really hope I am able to sample Sue and their other offerings in the near future.

Civil Rights Museum and MLK
My trip ended with the National Civil Rights Museum. Although there weren't any beer-related offerings for me to share from the museum, I do want to share some of the pictures from my visit and recommend that you check out the museum if you're in the Memphis area. The museum takes you through a literal recount of the events leading up to the assassination of Martin Luther King, Jr., including the assassination itself.


I can't express the impact of standing on the very balcony where MLK was shot and killed. It was an emotion experience to say the least; the museum has done a wonderful job of preserving the area and retelling the story of MLK's death and his lasting legacy on Civil Rights.
at 3:22 PM