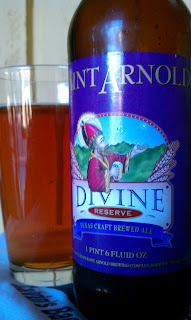 I received this bottle from @discipleofhops and need to give him a huge shout-out for sending me some Saint Arnold love.

I have reviewed a couple of Saint Arnold's brews and have mentioned the impact this brewery has had on the beer scene in Houston. The Divine Reserve series has had its own impact on the city as its not uncommon to hear of thousands of people calling off of work during the Divine Reserve releases. These are special release-single batch beers that usually sell out within hours of stores opening. Thus, waiting until after work to buy this beer just isn't a plan for success.

DR12 is an old ale recipe that actually came out of a 2011 homebrew competition. It pours an amber color with a slight white head.

The aroma is full of warm spices and there's a hint of funk on the nose. If I didn't know the style, I would almost think this is a farmhouse ale given given the spicy notes. Still, there is a malt backbone in the aroma that makes sense with this style.

The taste is not what I expected. The body is quite malty. Syrupy even. There are strong notes of molasses and caramel that are nicely balanced by a Belgian profile on the finish. My guess is Saint Arnold used a Belgian yeast strand in this beer. As this beer warms, there's a candied cherry  finish with a  sherry/boozy aftertaste.

Overall, this is a good beer, but isn't what I would expect from an old ale. This one seems a little more experimental to cleanly fit the old ale label. And while I think this is one of the weaker releases from the series, it's still work picking up if you have a chance to do so.