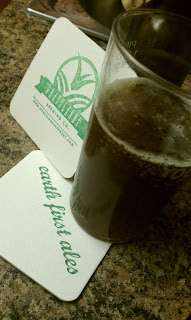 Look out Tallahassee! Grasslands Brewery is set to open sometime in 2014 and my prediction is that they will shift the Tally craft beer culture once they do. Grasslands is an environmentally-friendly brewery that uses organic and locally grown ingredients whenever possible

Here are my tasting notes...

Tally-Ho! CaraRye pours a murky amber with a slight head that fades quickly. This is definitely on the darker side of amber ales and resembles more a brown ale.

The nose is incredibly full. I get a lot of malt, caramel, and candied fruits. I also pick up a spiced scent from the rye, but everything is overshadowed by the intense malt aromas. 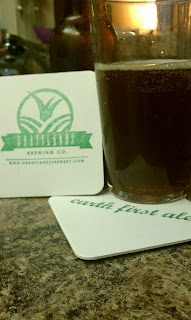 The flavors of Tally-Ho! CaraRye are surprisingly complex based on what I was getting from the nose. Yes, this beer has a strong malt flavor profile, but it's eloquently balanced by subtle citrus notes and a very rye finish. You can almost pinpoint where the various malt, hops, and rye flavors pop incrementally along the palate. The front is an explosion of caramel-malt-sweetness and, as the beer travels towards the back, there's a quick burst of hop-citrus followed by a dry-and-slightly-bitter finish. The aftertaste is a mix of sticky caramel and spicy rye.

I'll be honest--this is a tough beer to describe in terms of flavors. At first, I wanted to say this is a malt-forward amber, but that would not be doing justice to the cascade hop and rye flavors that really complete this beer. Tally-Ho! CaraRye almost reminds me of New Belgium Fat Tire, if Fat Tire wasn't watery and lacking complexity.

Tally-Ho! CaraRye Amber is a medium bodied beer that goes down smoothly. Very drinkable. Knowing that this a variation of what Grasslands is trying to go with for their flagship, I get the sense that they're going to create a lot of craft beer converts. I particularly appreciate this beer because it doesn't quite fit as an amber ale, nor can it be labeled as a rye. It's sweet. It's spicy. It's dry. It's fresh. 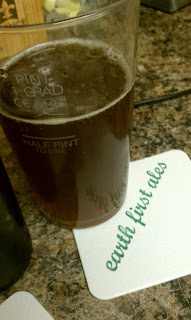 I am already a huge advocate for this brewery and I've only had one of their beers. I like what the brewery is doing in terms of creating "Earth first ales." I like the commitment to using organic and locally grown ingredients. I appreciate the personal emails and messages I receive from the brewery as one of the members of the Grasshoppers Club. There was even a personal message that came with my beer today which expressed gratitude for being a supporter of their brewery. The letter provided detailed information about the beer I was about to consume and the story behind it. It's rare to come across a business that dedicates so much time and energy to building a rapport with local supporters.

I have no doubt that Grasslands Brewery will do quite well when the doors open in 2014. And you can be sure that I'll make the two hour drive for the grand opening.

If you're interested in getting your hands on any of Grasslands' brews before 2014, register for their Grasshoppers Club which is your ticket in to getting exclusive releases from the brewery before they open. As a Grasshopper, you'll be eligible to enter the monthly lottery drawings to sample beer and provide critical feedback that may contribute to the final product. You can also check out Grasslands on Twitter and Facebook for more information.