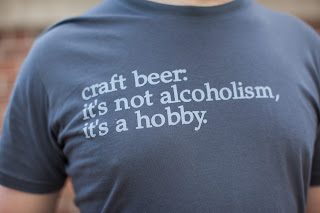 Craft beer's recent influx of success is due, largely, in part of the various enthusiasts who spend their time, money, and energy supporting their favorite beer and local breweries. I've seen beer geeks support craftbeer in a variety of ways: some brew their own, turn to social media and blogs, and others simply refuse to give their money to anything that's not craft.

Now thanks to Hopcloth, you can show your support for craftbeer with the shirt on your back. Literally. I came across Hopcloth on Twitter recently (@hopcloth) and was immediately intrigued. I wanted to learn more about the business and, most importantly, what it offered to the craftbeer community.

I reached out to Jeff Smith, the creative mind behind Hopcloth, and he was kind enough to answer a few of my questions. Below are my questions and his responses. I encourage you all to check out the Hopcloth website and order a few shirts. After talking with Jeff, I am completely sold on what he's doing and love that he has provided another outlet for people like me to spread the good news about craft brews! 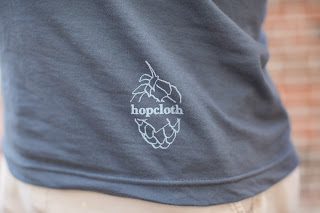 Where did the idea for Hopcloth come from? What is your inspiration?

From two places: Twitter, where I've been sort of crowd-sourcing sayings and phrases for a while and from the terrible beer t-shirts my mom has been buying me for Christmas.  This year's said "relief pitcher" and displays a pitcher of beer.  I also have "In dog beers I've only had one" and the Life is Good parody: "Life is Crap: Out of Beer."  I just feel like the craft beer drinker doesn't have shirts that allow them to express themselves.

Do you have other shirt designs in mind? How quickly do you plan to roll out new designs?
I have quite a few ideas, but I'm just a tiny startup.  I had to convince my wife to allow me to put this first pressing on the credit card.  The thought is that if I can sell through this first pressing pretty quickly, I'll do another design.  If they sit around for months and months, then I'll assume I'm the only one who wants to wear clever, craft beer t-shirts.  I think the biggest challenge will be getting beer fests and bars to allow me to set up a table or at the very least walk around to sell my shirts.  Without a brick and mortar presence, my success depends on exposure.  Any help I can get with that will be huge.

Where can people go to buy your shirts?
Right now, I have a splash page set up on hopcloth.com that links to my etsy and ebay accounts.  It's just one design so far [a second design is on its way!] and I'm selling them for $15.  I figure since craft beer drinkers have discerning tastes with what they drink, they feel the same way with what they wear.

Would you ever endorse one particular brand or brewery or is your mission more to bring a general awareness to craft beer?
More than anything, I'd just like to give ways for craft beer drinkers to express themselves.  If that's a conversation starter that allows them to talk about craft beer with a "non-believer" then that's fantastic.  If it just allows them to tell everyone that they're a craft beer nut, then that's good too.  I think that small triggers like a t-shirt slogan or a sticker can help foster the great community of craft-beer drinkers.  I just got my shirts in the mail today, so I'm excited to wear one out and see what conversations it starts. 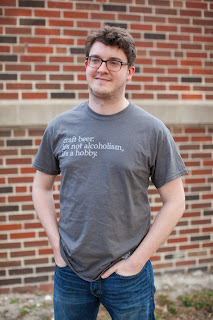 In closing, I asked Jeff to share anything else he would like people to know about Hopcloth. Here's what he said:

I'm a startup with zero capital.  My logo is free-handed using freeware.  My friends are pitching in with their various levels of expertise.  I completely rely on word of mouth and one right person hearing about my shirts could be huge.  I have always said "craft beer people are good people," and I hope this opportunity will exemplify that.  I'm not looking to get rich off this.  I would just like to make enough to afford my hobby.

That right there is enough to gain my support. He's a modest guy with a novel idea.

There are two things that I learned about Hopcloth that really impressed me. First, I love that the shirts are all made in the USA. I feel like purchasing shirts from the sweatshops would not only be anti-American, but counter-culture to craftbeer. Secondly, I appreciate the how the business has started. It's based on a whim. He not only needed to convince his wife of the idea, but he then had to charge the first pressing to a credit card. This isn't necessarily about getting rich; it's about going after something you have a passion for. Again, very American.
I want to thank Jeff for taking the time to answer my questions. I truly wish him and Hopcloth all the success in the world. I'll be putting in my first order soon and I hope you all will do the same. Be sure to follow Jeff on Twitter at @hopcloth and check out his website here: hopcloth.com. 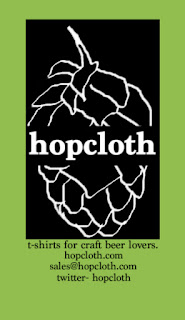