Wrecking Bar has charm and appeal in every aspect of its establishment. The bar is located in  the cellar of a 20th Century Victorian home built just before the 1900s. While the term brewpub doesn't usually evoke notions of eloquence and  prestige, Wrecking Bar has all of that plus the grit and casual vibe one would expect from a local pub.

Before I get to the beer, I have to mention that the service I received from the Wrecking Bar's staff was phenomenal. I was greeted as soon as I sat down and given a thorough explanation of the Wrecking Bar's history and current beer selection. The entire staff was extremely knowledgeable on the various beers they brew and was eager to give me their personal recommendations and favorites.

One of the people who made my experience so enjoyable was Ian (@wbiancox), who I believe is the General Manager. Ian recommended his top three beers and also guided my order off the food menu, which I will get to in a moment. Ian, like everyone else I came into contact with at Wrecking Bar, was extremely helpful and excited to help me select the various items from the menu. As I was sitting there, I couldn't help but think, either they pay their staff extremely well and I should consider quitting my day-job, or the food and beer is really that good and the staff can easily stand behind the product. 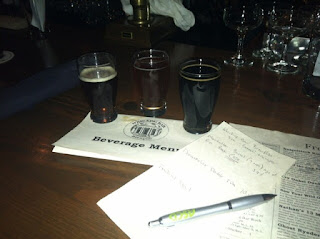 Based on Ian's recommendation, I chose three brews to sample. I tasted a rye bock, double IPA, and an Imperial Stout. All of them were well crafted and extremely enjoyable; easily some of the best beer I have had lately. And boozy! You'll notice a trend in my notes in regards to the booziness that came with each beer. That, I am sure, had an impact on how much I loved what I was tasting. Here are my tasting notes:

Manhattan Barrel Aged Rye Bock--Cask Poured (6% ABV)
This was the first beer I had and let's just say the stakes were raised after tasting this beer. Aged for two months in Manhattan (yes, the cocktail) barrels, this rye-bock was poured from a cask and served just below room temperature. The body was fairly light and had virtually no carbonation due to the cask pour. The aroma was all alcohol and malts. There's no question that the Manhattan barrels have made an impact on the aroma of this brew. The taste was sweet on the front of the palate with predominate flavors of caramel and malt. The rye spices came out nicely on the finish, which was also very boozy.

Denamelizer Double IPA (10.4% ABV)
I'll admit that before tasting this beer, I did something I usally try not to do--I read the brewer's description of the beer. With a name like "Denamelizer," I had to read about the hops. As the description divulged, this DIPA was brewed with five different hopes and has a whopping IBU level of 140. Folks, that's 20 more than Dogfish Head's 120 Minute IPA.

Surprisingly, this beer was incredibly balanced. The hops were there, but they weren't overpowering and I never felt concerned about the enamel on my teeth being stripped away as I finished the glass. Both the aroma and the front of the palate were full of the hop profile--lots of floral characteristics, pine, and lemon and orange peels. As the beer moved to the back, I picked up a pleasant malt base which I enjoyed. The finish was boozy with a spicy and dry finish. I even picked up some rye on the finish, which makes me wonder if this is a derivative of the rye-bock recipe. 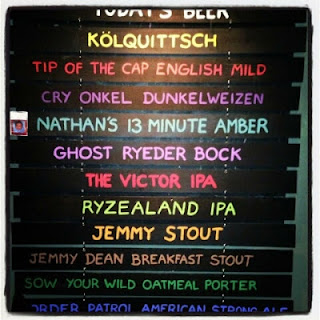 The final beer that I tasted at the Wrecking Bar was not just the best beer of the night, it was also one of the best beers I have ever tasted. Period. This beer was so good that I have already thought about taking the five hour road trip from Jacksonville to Atlanta just to get some more of this stout before it runs out.

This particular version of their RIS was aged for nine months before being tapped. The profile was full of rich malts, semi-sweet chocolate, bourbon, and toffee. The beer had a radiant bourbon and chocolate aroma that almost literally pulled my nose into the glass. The body was on the heavier side and included a smooth and creamy texture. Very little carbonation. The finish, like the rest of the palate, was one part chocolate to one part bourbon. It was reminiscent of World Wide Stout or Bourbon County Brand Stout, but better. Like I said, this is one of the best beers I have ever had.

The Food:
Based on Ian's recommendation, I chose the barley dish off the menu and added grilled chicken to the otherwise vegetarian dish. The plate was risotto with an artichoke puree, pumpkin seeds, mixed vegetables, cheese, and the grilled chicken. Honestly, this dish could have easily come from a high-end restaurant in midtown Manhattan. The dish was savory, comforting, and paired very will with the Denamelizer Double IPA.

Although I didn't try any of the other food, it all looked gourmet and delicious. I was just blown away by the skill and quality of beer and food that the Wrecking Bar produces. There's literally nothing negative I have to say about my experience at Wrecking Bar. I have seldom walked away from a place as satisfied by everything that I consumed during my visit, not to mention the service was stellar.

If you're in the Atlanta area, this is a must-stop brewpub. I promise you'll walk away glad you took my advice.