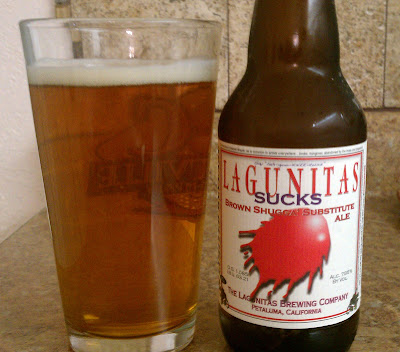 Ok, so truth be told, Lagunitas actually doesn't suck. In fact, they're pretty amazing cool people. What other brewery is so confident in themselves that they would 1) admit that there was an issue with brewing a batch according to its recipe, 2) brew that beer anyway with a substitute ingredient, and then 3) make fun of themselves by saying they "suck"?

Lagunitas is kind of like that friend who we all have and no matter the circumstances, things just always go right for this person. Bad luck brings good fortune. Yeah, that's exactly what happened to Lagunitas. 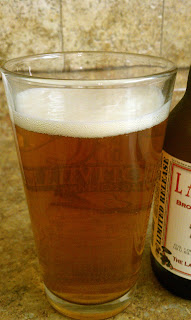 I recall when Lagunitas Sucks first came out in 2011. I was skeptical about the whole story behind the beer, but bought it anyways. After trying the beer, I remember calling a buddy of mine and telling him he had to go out and buy some because it was actually better than the original. As it turns out, a lot of people had that same reaction and Lagunitas decided to brew some more...on purpose this time.

Naturally, I felt compelled to buy Lagunitas Sucks once more. This time, however, I am more interested to see if they were able to recreate the 2011 release. So here are my tasting notes...

The appearance, as you can see, is a golden amber color with a quarter inch head that laces the glass as the beer is consumed. The carbonation is easily seen rising from the bottom of the glass, so I am expecting a nice zing from the CO2.

The aroma is a lot of pine and grapefruit/citrus hops. I don't really get a ton of depth beyond that; just hops.

The taste follows suit with the aroma--pine, grapefruit, lemon zest. As I expected, the carbonation is a nice factor in how the hops dance on the palate. The flavors of the various hops come into play due to the carbonation. There is a mild sweetness in the middle that works to balance this drink. The malt is subtle, but it's there. The finish is dry and bitter and long.

It's drinkable and, dare I say, refreshing? I love the body of the beer which is on the fuller side for the style. Despite the fact that this is undeniably a hop bomb, there's a lot going on here.

Lagunitas Sucks is affordable AND highly rated, a combination you don't fine too often. Oh yeah, and you can also get this in 32oz Quart jugs. #MindBlowing.

Cheers to you, Lagunitas, and all your good fortune.