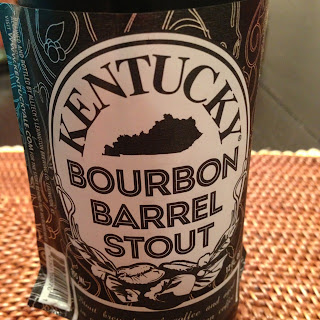 Bourbon barrel stouts create a lot of attention. Until recently, the style was reserved for limited and special releases, and were often highly sought after creating even more hype to the already buzzworthy style. But in the last few years, more and more breweries have jumped on the bandwagon and have created bourbon barreled beers (some stouts, some not) that are more accessible and not so ridiculously priced. It seems like every brewery has their own bourbony concoction to offer. Lexington now has two. Aside from their award winning Kentucky Bourbon Barrel Ale, they now have a barrelled imperial stout to offer patrons with a boozy appetite.

If you follow me on Twitter, you probably already know that I am quite disappointed with this beer. However, before you read my tasting notes, I do want to qualify my review with this statement (which should be applied to any beer review you ever read--yes, even reviews from those Alstrom brothers): Each person's palate is unique and it's impossible to give a completely objective review as we all have our personal preferences when it comes to flavors. So, my metacognitive self recognizes that I generally lean towards full-flavored beer and, when it comes to bourbon barrelled beers, I expect homerun hitters.

On to the tasting notes... 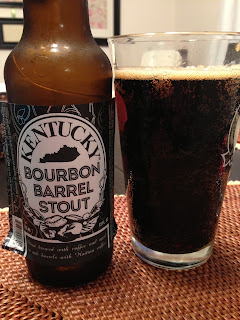 Appearance: dark as expected, but has a significant amount of carbonation that more closely resembles a Pepsi than a stout-- maybe that says more about my archetype of a Stout than anything else.
The head is minimal, tan in color, and dissipates quickly.

Aroma: Sweet vanilla and bourbon come out strong. Beneath that I can pick up some burnt sugars and molasses.

Taste: At first, I had trouble picking up on the flavors. The carbonation seemed to really interfere with the palate. I let the beer warm for about 7 minutes before taking another sip to see if the carbonation would mellow any.

After sitting for 7 long minutes (I'm not good at being patient), the vanilla definitely sang a deeper tone, but I still struggled to get the bourbon or anything else for that matter. This beer is very sweet up front which really masks the other flavors. I get a lot of coffee in here too, but more of a vanilla cappuccino than a dark-roasted coffee that you might expect. The bourbon is definitely there, especially on the finish and aftertaste, but it's weaker than expected and not nearly as pleasant as it is on the nose.

Mouthfeel: The body of this beer is somewhat light, too light for a stout. It's over carbonated, a bit watery, and lacks character.

Overall: Again, I am disappointed. Though the beer did open up with warmth, it was still too weak and watery for my liking. I thought the vanilla, at times, was overpowering and too sweet. The complexity that one would expect from an imperial stout is missing and I won't even reiterate what I expect from a bourbon barrelled imperial stout. I expect many will enjoy this beer because it's not nearly as intimidating as others in this style and its light body and subtle booze makes it a very approachable beer. 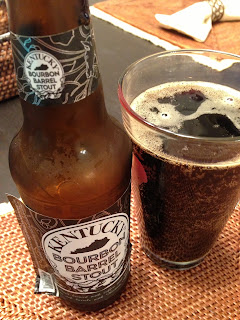