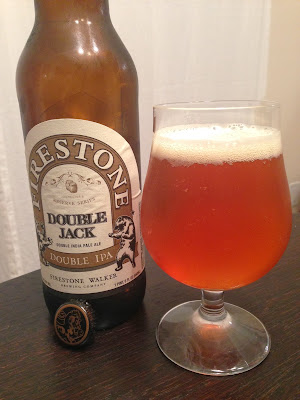 Double Jack is a double IPA from the highly acclaimed California brewery that took home a bronze medal for this beer at the Great American Beer Fest in 2012. This is the first ever Imperial IPA from Firestone Walker; it's done quite well, receiving ratings of 100/100 and 97/100 on Ratebeer  and  BeerAdvocate, respectively. 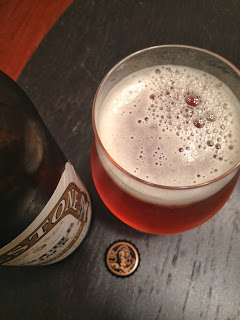 Aroma: Sweet, hoppy, and herbal nose with lots of malt and caramels. This is really pleasant. The hops and floral notes are rivaled by the sweet sugary malt scents. I expect this one to have a really well-balanced malt backbone...and that gets me VERY excited!

Taste: The hops are far more prominent on the palate than they are on the nose. For a split second, I thought this was going to be a sweeter beer, but that notion was quickly denounced by the wave of earthy dryness from the hops. The taste begins with a touch of citrusy sweetness that is quickly washed away by pine and zest. The flavors are quite herbal in the middle, and the hops have a drying effect as the beer moves towards that back of the palate, where the finish is piney and dry. There is a nice malt undertone that I am able to pick up the more I drink this beer (probably has something to do with the warming of the beer as well).

Mouthfeel: This is a medium-bodied beer, maybe even on the lighter side of Imperials.

Overall: This is very enjoyable and drinkable. This is a 9.5% beer that hides the alcohol well. The flavors are vibrant and complex. Double Jack definitely lives up to the accolades it's received online and within the beer community. I'm glad to have had the chance to try this.

Also, something I failed to highlight earlier is the price-point of this "World-Class" beer (based on BeerAdvocate's standards). At $7, I doubt you'll find another bomber of beer that's as highly regarded and delicious as this one is. When was the last time you bought an imperial beer that's rated as high as this one for under $10? Yeah, didn't think so.