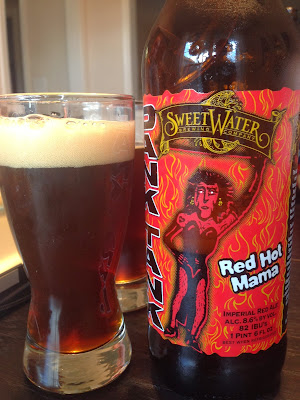 Sweetwater's Dank Tank Series always provides exiting specialty beers with a unique storyline. Red Hot Mama is not an exception. According to the label, Red Hot Mama is named after a promiscuous woman who found favor among farmers. While this was fun and games for many, there was one unfortunate farmer who found himself out of luck after this hot mama took all his hops and skipped town. 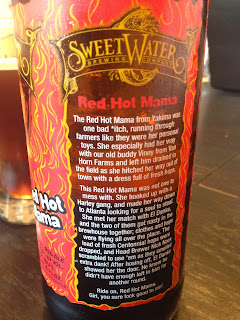 One thing led to another and, before you knew it, she was brewing a batch of some hopped-up-goodness. The result produced the latest installation (October 2013) in the Dank Tank series.

The pour of this beer is much darker than I expected for a red ale. In fact, I would call this a brown ale over a red ale. The head fades quickly and there's almost no visible carbonation.

The aroma gives off a nice hop and pine scent. Not a whole lot of malt on the nose, which is not what I would expect.

The taste is hop first and malt second. There's a toffee sweetness that accompanies the malt and then finishes with some alcohol and pine.

This is probably my favorite Dank Tank release in the last year or two. You can definitely taste the various levels of ingredients and I think the alcohol is balanced well by the hop and malt base. Unlike my review of The Gimp, I think this one should be consumed fresh. The hops are nice in this and I would hate for someone to miss out on the citrus flavors due to putting it away in the cellar.