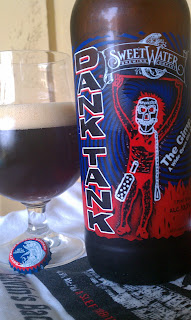 The Dank Tank Series is an experimental series in which this Atlanta brewery stretches its creative mind and taps into a fun, creative, and riskier side of brewing. I appreciate the Dank Tank Series because these beers are exactly the type of products every beer geek fantasizes his or her own brewery producing. These beers are crazy and cool. The Dank Tank is full of strange and intriguing concoctions that, if nothing else, are imaginative, providing a memorable beer-experience for consumers.

Here's how the brewery describes the series:


A series of rarely release beers from the dark side of our brewers souls.  These one hitters are only released a few times are year and are in very short supply so get em while the getting is good.

If nothing else, the bottle is fun and worth to add to the collection. Here's the caption on the bottle:


The Gimp A love story! A wide open Old Ale, The Gimp gags up Alc.10.3% by Vol. and is bred to be stashed in a Dank dark cellar only to be brought out for your most “special” guests! This full-bodied Gimp gives off sweet scents of caramel and toffee and, as legend has it, warm sensations of malt balanced by low voltage doses of hops delivering a SHOCKER you’ll actually want to receive. Don’t keep The Gimp’s leash too tight, as he will mellow with age and become more experienced the longer he stays locked up in the cellar. Bring out The Gimp! 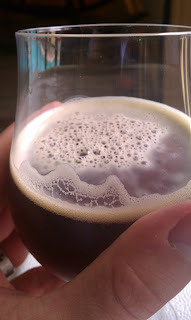 The Gimp pours a dark brown with deep amber tints when held to the light. The aroma is full of caramel, dark fruits, and burnt sugars. I also pick up some alcohol tones, but it's not profound enough to distinguish exactly what it is.

That's not the case in the flavor. There's an alcohol bite that comes with this beer. The flavor profile starts off with lots of fig and other dark fruits along with caramel and malt. But as I said, the booze is strong. There's an earthy-alcoholic dryness that dominates the palate. After a sip, my lips feel sticky and my throat dry.

This beer almost reminds me of a barleywine (due to the dark fruit flavors, booze, and burnt sugars) but it's way too dry and bitter to be one. 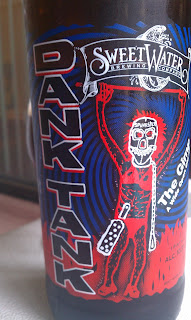 I'm not sure how I feel about this to be honest. The heat from the alcohol is a little too strong for me right now. I think this needs some time in the cellar to let the booze mellow and allow the other flavors to come forward more prominently. If you're going to try this, do yourself a favor and grab an extra bottle or two and store it away in your cellar (or as I call it, the master closet). I think this is going to be a winner in a year or so. For now, it's an interesting take on a difficult style. But in my opinion, it hasn't reached its peak yet.

One last thing. I am always conscious of the price of beer, which is why I list the price at the top of each of my beer reviews. Some people think the price doesn't matter. I guess they make more money than me. Price definitely matters.

As I stated in my post, "The Cost of Craft Beer," I don't appreciate breweries that hike prices on special releases simply because they are "special." Dank Tank The Gimp is affordable despite being a rare and limited release. So, if anyone from Sweetwater is reading this, thanks for brewing a limited-release beer that doesn't limit my budget.