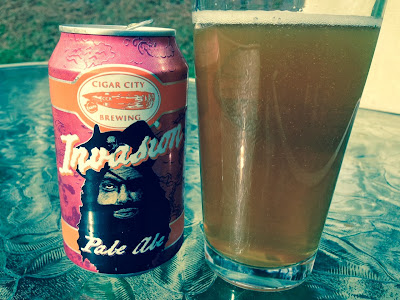 Cigar City had some fun with this one. The back of the can tells the story of a city that's been invaded and under siege for the last century. Out of options, CCB joins forces with the blasted buccaneers and brews up a tropical pale ale that's sure to please patron and pirate alike! 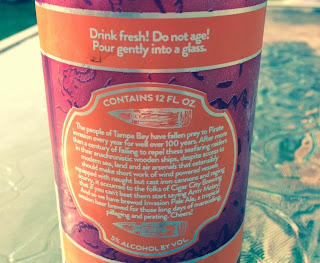 Invasion is a session ale that pours a cloudy yellow with a decent sized fluffy head.

The aromas are all hops: pine and citrus. This smells like a hop bomb...much hoppier than I would expect from a pale.

Taste: The first sip is full of grapefruit. It's tart at first, but then I get the tropical sweetness from various fruits. The finish includes more citrus notes--I get a lot of lemon zest that's balanced with a piney bitterness. 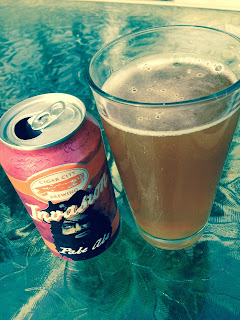 The headline around this beer is hops. The hops literally invade every aspect of the palate as this beer is consumed. However, there is complexity here. I noticed a yeasty-wheat aftertaste with the lemon zest. And call me crazy, but I pick up some fresh cilantro too.

I appreciate the folks at CCB calling out that this beer should be consumed fresh. The hop flavors literally make this beer and time does not treat hoppy beers well. However, I have one piece of critical feedback: if I am expected to drink this fresh, make sure I can read the date that's printed on the can. I think this one says it was bottled on Nov. 25th, but I can't be too sure. 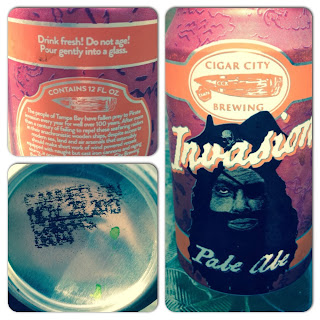 Overall: This is a sessionable beer at just 5%, but I question whether it's something I could continuously drink by the pool. While it's light in alcohol and calories (estimated at only 150), the citrus, pine, and zest make this beer a bit too abrasive for a session beer. But if you're looking for a beer that packs a punch in the mouth but not on the waistline, you've found your match!