I recently came across this article by The Jax Beer Guy about the rise of craft beer in America. His blog mentions a post originally published by The New Yorker which includes an interactive online map illustrating the rise of the craft beer industry in America. The map is pretty cool, and I recommend you taking a look at it via the link below.

Mapping the Rise of Craft Beer.

But what was most exciting to me was how the map shows the growth of the beer industry in Florida and possibly even foreshadows what is to come for the Sunshine State. Take a look at the screen shots below.

This first map shows what most craft-loving-Floridian-beer-nerds already know: Florida is a bit of a desert when it comes to claiming big-production craft breweries. None of the top 50 breweries (in terms of size) call Florida their home. 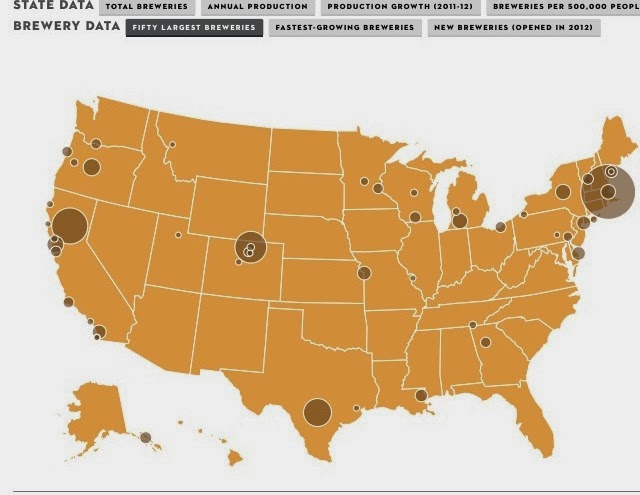 In my opinion, that isn't nearly as important as the next two images I am going to show you. This next picture shows the fastest growing breweries in the US. Floridians will be happy to see one of their own among the list: 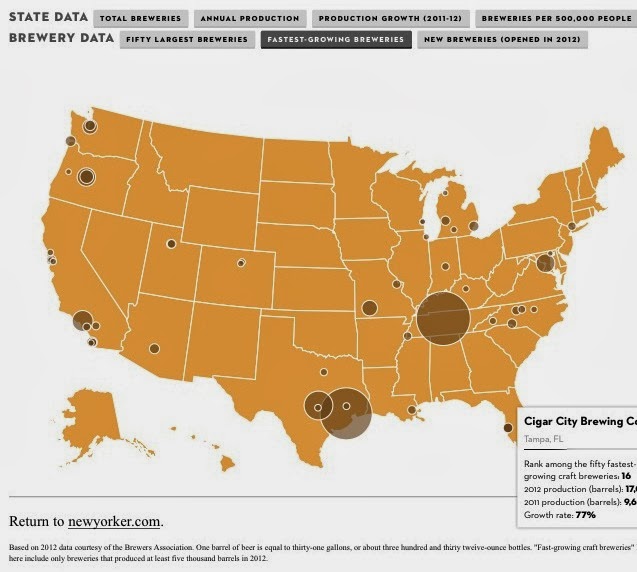 As you can see, Cigar City ranks 16th among the fastest growing breweries in America. Anyone who has been to the brewery knows how impressive this is. The brewery just recently expanded its facility and production capabilities. CCB's growth, I believe, is largely prompted by demand, demand created by the deliciously satisfying beer that the brewery produces on a consistent basis.

I think Cigar City has paved the way for future Florida breweries. They have proven that even in a region of the country that has been a bit reluctant to accept craft beer, you do not have to compromise the quality of your product to be successful.

Speaking of future Florida breweries, check out this next image: 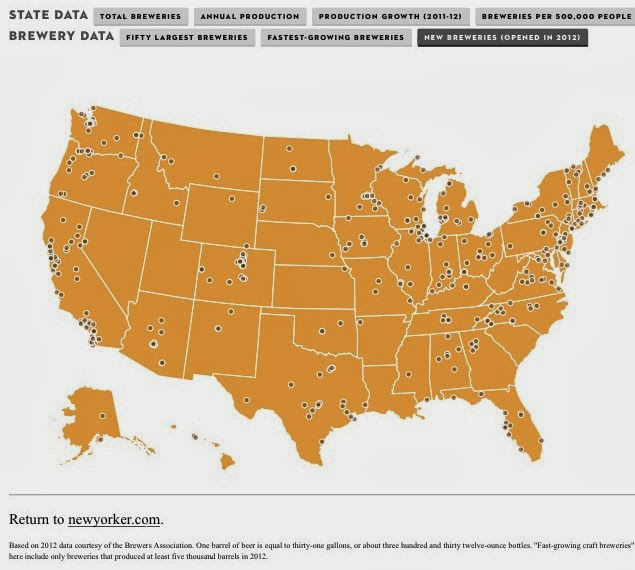 The image above shows that Florida is doing its best to level the playing field. This map, which was taken from 2012, shows 9 new breweries. If the map was updated, there would be a dozen more for 2013. Just this year, I have witnessed two breweries open their doors in North Florida: Aardwolf Brewing and Tomoka Brewery.

I also think it's worth noting where this map shows a high concentration of new breweries being built. The greater Tampa area is exploding onto the beer scene, probably thanks to Cigar City's success on a State and National scale.

As 2013 closes, let's raise our glass to the growth of craft beer in America and hope 2014 continues the trend. And it will.