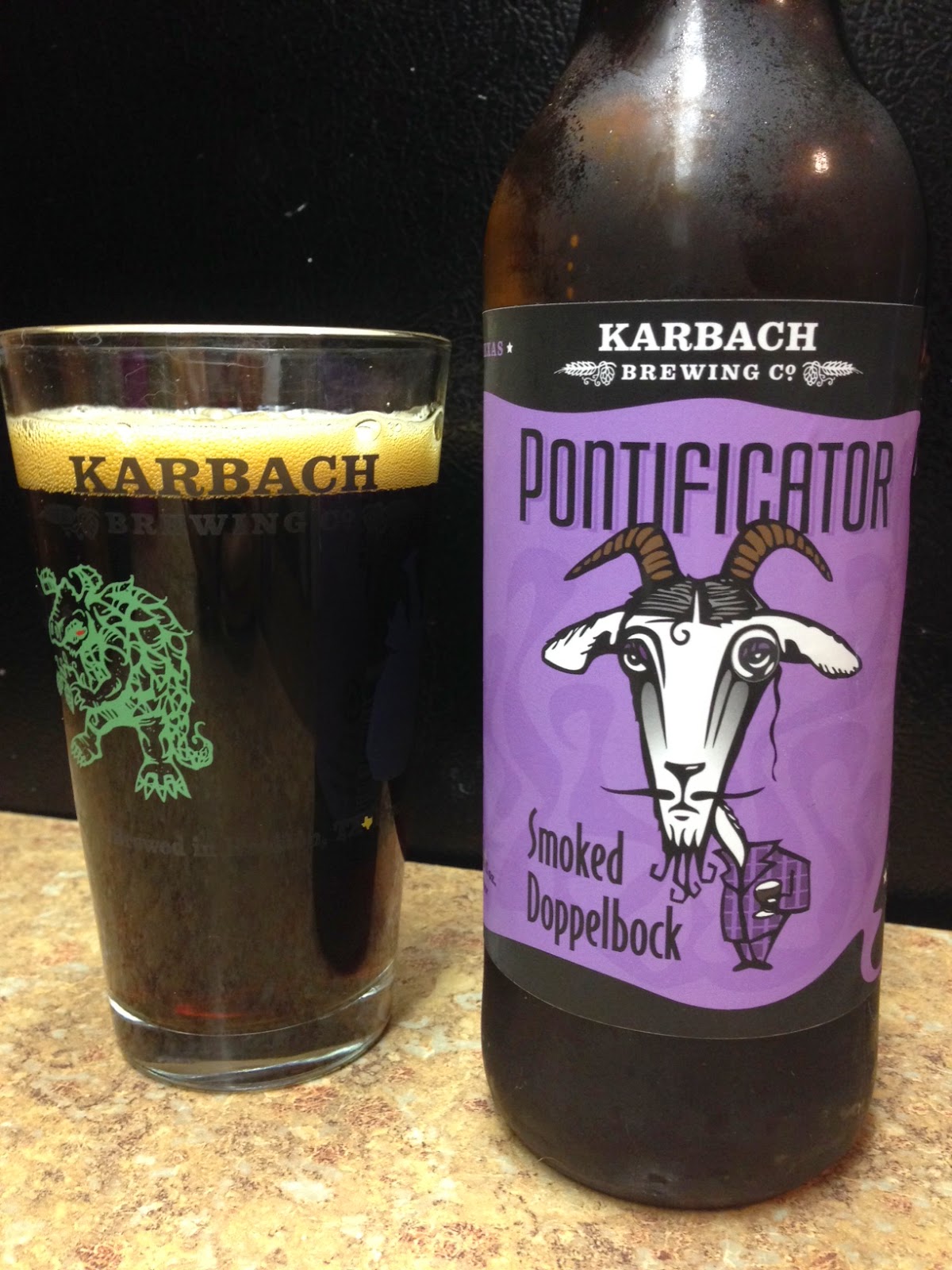 I often show love to Texas breweries on this site for two reasons: 1) I lived in Houston for 5 years, and 2) it's the place where I experienced my craft-beer-conversion (I am forever indebted to Saint Arnold's Spring Bock and Oktoberfest beers!).

Karbach Brewing opened at the tail end of my stay in Houston, preventing me from really getting to know them as a local brewery. Fortunately, I've had several opportunities to try their beer, even after moving to Florida, thanks to the Texas-sized generosity of the folks I left behind.

This particular bottle was sent to me by David, one of the Sales and Marketing guys at Karbach. I just can't speak highly enough about how classy these guys are, and am thankful for their generosity with this one. Cheers to good people who make good beer!

Speaking of the beer...I had never had Pontificator before this tasting, but had heard plenty of good things. I have one friend in Texas who swears by this beer and almost refuses to drink anything else.

Pontificator is a smoked doppelbock. Doppelbocks are strong and malty German lagers that are generally big-bodied beers with little-to-no bitterness. The smoked characteristic of this particular doppelbock comes from malts that Karbach smoked on some Cherry-wood. This should provide a bit of  dry and smoked flavor throughout the beer.

Appearance: Deep dark brown. A thick creamy head forms as this beer is poured into the glass.

Aroma: Pontificator gives off a sweet caramel scent that is accompanied by substantial smokiness. I also detect brown sugar and bready malts.

Taste: Similar to the nose, this beer prominently features the smoked malts, giving the beer a "meaty" flavor which helps to balance the equally prominent sugary notes. While the malt backbone is sweet, it's not overly done. There's raisin, brown sugar, fig, burnt caramel, and...is that BACON? I doubt any bacon was used in the brewing process, but let's go with it and move forward.

Overall: This is an excellent beer for the style. Truth be told, I am not a huge fan of smoked beer. Sometimes the smoke is overdone and takes away from the other flavors. However, Karbach has done a nice job of maintaining balance and order in Pontificator. The smoke is a key player, but it never really trumps the dark fruit and caramel sweetness that hit nicely on the tongue.

Again, I want to thank the guys over at Karbach for sending this beer for me to sample. I thoroughly enjoyed Pontificator and hope to try more soon!

This is my third review of a Karbach brew! To see the others, click here!

Thanks for reading the Beer Apostle and for supporting craft beer! Join in on the discussion by following me on Twitter and Facebook! Cheers!
at 1:46 PM