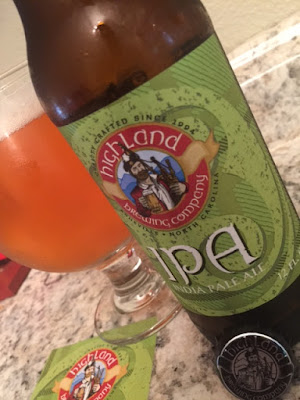 Highland Brewing recently sent me a sample of two of their most recent releases: Highland IPA (a West Coast-Style IPA) and Black Watch (a Double Chocolate Milk Stout). This is the first full review of both beers.

Highland Brewing Company officially released the West Coast-style IPA on Jan. 4 and it is the first of 12 new beers the 22-year-old brewery will debut in 2016.

“Our vision for intentional growth and our talented team inspired the additions of a West Coast IPA and other exciting styles to our portfolio,” said Leah Wong Ashburn, president of Highland Brewing Company. “At the same time, I see Gaelic growing. It’s our workhorse and my go-to beer. The combined strength of classic and new styles, done well, is our future.”

"Highland IPA will be my favorite in the Southeast,” said Stephenson. "There are some good specialty IPAs in North Carolina, but as a year-round offering that is drinkable and edgy, I think Highland IPA is unique. It is assertively bitter, but not overwhelming. The ABV is higher than what you see in a lot of new IPAs, but not so high that you can’t go back for another. For me, Highland IPA is a pint or bottle of what defines a West Coast IPA."

So how is the West Coast-Style IPA? Glad you asked! 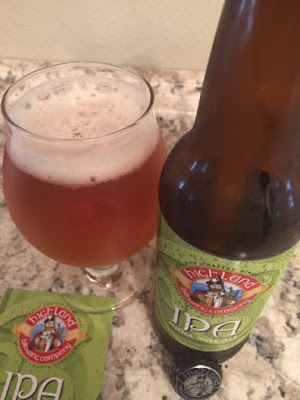 Taste: Right away, I get a lot of citrus and lemon zest flavors that lead into a nice malt presence. There's a tropical fruit juiciness that becomes more prominent with each sip. The finish leaves a pleasantly bitter and slightly dry aftertaste.

Overall: This is a well-balanced IPA. Brewer, Stephenson, hit it on the nose with labeling it as, "assertively bitter, but not overwhelming." This is an IPA that I could drink year-round. It's flavorful but not over the top. It's sweet and enjoyable but still very much an IPA. This may be my favorite offering from Highland yet.

To learn more about Highland Brewing company and the beer they offer, visit https://highlandbrewing.com/

To see more from the Beer Apostle, be sure to check out the Archives section! Have questions or feedback, contact me and share your thoughts! And don't forget to join in on the discussion by following  on Twitter and Facebook!
at 2:58 PM