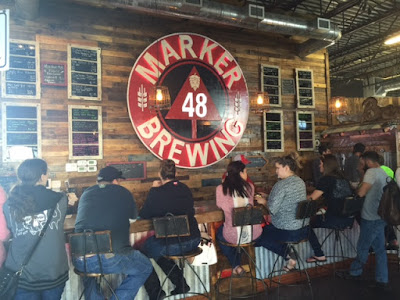 I started following Marker 48 about a year ago. They hadn't opened their doors for business yet, but they were already making their mark in the community. I first met owners, Maurice and Tina Ryman, at a beer festival and charity event. Their booth was packed, the line to try their beer was long, and the Rymans made an effort to talk with every person who came to sample their beer. I must have tried dozens of beer that night and met more people than I could remember, but I didn't forget Marker 48. They had made an impression on me as I suspect they did for others. That impression grew in favor as I followed the construction and building process of the brewery leading up to the grand opening in late-November 2015. 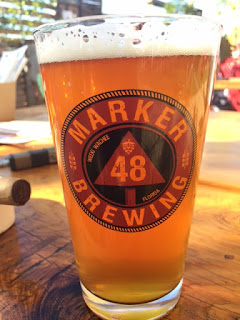 Fast forward to this past weekend when I happened to be in the Brooksville area for Valentine's Day. We made a stop to the brewery and it was the highlight of our weekend.  As I was sitting outside, listening to live music in the Marker 48 beer garden, Maurice and Tina were going from table to table talking with patrons. It was just as I had seen them do months before. They make it a point to talk to the folks who come out to the brewery and I think that makes a world of difference. Drinking at Marker 48 becomes a familiar affair. Judging by the number of strollers, kids, and dogs, I don't think I am the only one who feels that way.

I tried three beers during my visit, and thoroughly enjoyed each one. I started out with Mo Say It, an American pale ale brewed with Mosaic hops. This pale ale has a vibrant aroma and nice tropical fruit flavors. My next beer was the Pine Island IPA, which has become one of my go-to IPAs. Pine Island is an approachable IPA with a balanced malt/hop profile without being aggressively bitter. My last beer was Mermaid's Milk on Nitro. Mermaid's Milk is a beautiful blend of sweet, rich, and roasted flavors. It's a creamy stout that doesn't quite drink like a stout and finishes with just enough lactose sugar.

If personable owners and great beer isn't enough to convince you to visit, the atmosphere of Marker 48 surely will. The interior is beautifully designed with wood finishes and charming features, like the toilet that encourages folks to recycle their beer after they're done using it. The building itself is reclaimed--what used to be a tire and lube shop is now a beer brewing haven. The old garage doors from the lube shop open the taproom and lead patrons into the outdoor beer garden that includes ping-pong, jumbo-sized Jenga, live music, and Adirondack chairs. It's like having a fully operational brewery in the comforts of your own backyard.

On my way out, I noticed this donut-making food truck and couldn't help myself. I order 12 made-to-order donuts that capped off a perfect afternoon. 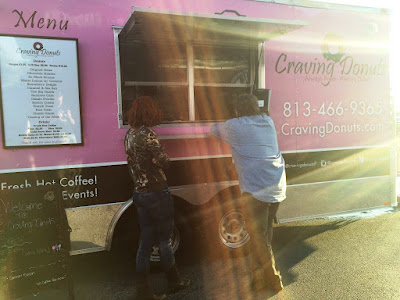 There's a reason it was recently named by Beer Advocate as one of 2015's best new breweries. It's a must-visit location that has put Brooksville, FL on the beer map.

To see more from the Beer Apostle, be sure to check out the Archives section! Have questions or feedback, contact me and share your thoughts! And don't forget to join in on the discussion by following  on Twitter and Facebook!