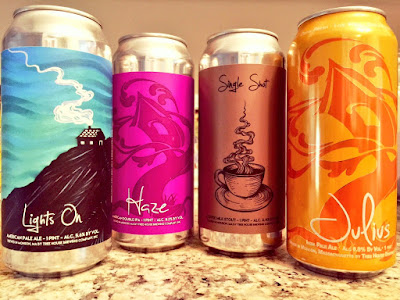 I received a message recently from Eric of Nine State Brewing. He asked if I had ever tried anything from Tree House Brewing Co. I explained that I hadn't but would love the opportunity and, just like that, I received a packaged containing these four beers. Eric's only request was that, in return, I provide my readers with honest and in-depth reviews of each beer. Challenge accepted!

After doing some research on each of the four beers, I decided to start with Julius and work my way through each one, posting a review as I go, based on the hop profiles of each beer,taking into consideration the beers that should be consumed fresh. 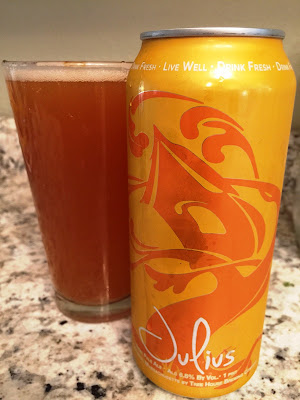 Julius is Tree House's flagship American IPA. Julius has a perfect score of 100 on both BeerAdvocate and RateBeer, and has become one of the more sought-after American IPAs as of late. Just a quick glance on any of the beer trading forums and you'll quickly see there is a considerable buzz around Julius. However, I will state for the record: I am not one to fall in line with the hype around beers. Without naming specific labels, there are several "whales" that dominate the ISO forums that, in my humble opinion, are not worth the trouble people go through just to get their hands on a beer that may not be much (if any) better than the beers brewed at your local microbrewery. With that being said, I trusted the endorsements given by many who have tried Julius and was eager to give it a taste for myself.

As soon as I opened the can, the aroma from Julius instantly fill the room. Just as if I had lit a candle, the kitchen filled with vibrant scents of citrus and tropical fruits. There was also a considerable amount of orange notes detected. 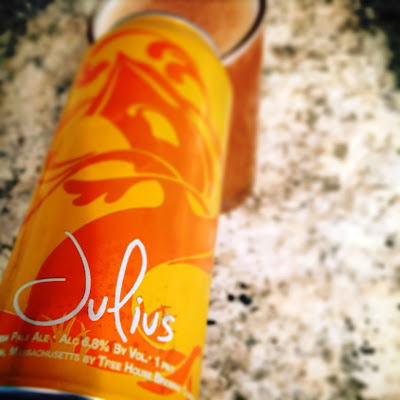 Julius pours a deep haziness. This is as cloudy as I have seen an IPA. The color is spot-on: a beautiful orange hue to match the theme and label.

Complex layers of citrus and tropical fruits attach the palate. Julius is just as sweet and juicy as advertised, and full of oranges--both fruit and rind flavors. But for as juicy and fruity as Julius is, there's also a good amount of bitterness that balances this beer. I have seen some reviews labeling Julius as sweet with little bitterness, but I would have to disagree. I get a good amount of bitterness, but it's just not overpowering. As for a malt profile, there's not much of one. Julius is juicy, tropical, and citrusy. 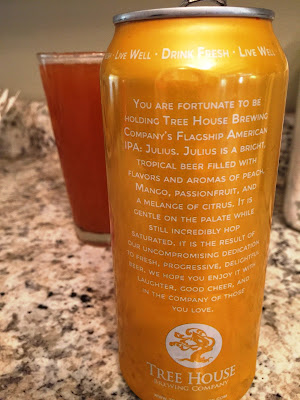 Overall, Julius is as near a perfect IPA as I have tried. In many ways, I find this to push boundaries on what my archetype of an American IPA is or was. Julius' juiciness is unmatched. And the amount of fresh orange flavors that are packed into this beer is impressive. As far as I can tell, Julius deserves the credit and even the hype. It's refreshing and delicious, and I wish I would have received more than just one can.

To see more from the Beer Apostle, be sure to check out the Archives section! Have questions or feedback, contact me and share your thoughts! And don't forget to join in on the discussion by following  on Twitter and Facebook!