Released each week for the remainder of 2017, the beers could lead to valuable prizes for the brewery’s customers

WEEKI WACHEE, Florida (February 7, 2017) — Marker 48 Brewing has introduced a new promotion that will offer participants a chance to win magnificent prizes at the end of the year, as well as pours of unique one-off beers throughout 2017.

The Beers:  Our Brewers and select guest brewers have committed to brewing 48 different small-batch beers, one new beer every week, for the remainder of the year.

The books cost $100 each and are on sale in the tasting room, Weeki Wachee, Florida. In addition to the 48 free beers, book holders will receive a stamp for each Smallbatch Beer drank.

The Prizes: At the end of the year those individuals who have all 48 stamps will get an exclusive Marker 48 Smallbatch Beer shirt AND a special 20 oz. glass to be kept in the brewery to receive core beers in for the same price as 16 oz. beers.


You must purchase a Smallbatch Beer Book to receive the stamps and qualify for the prizes but you do not have to have a book to come in and order each week’s Smallbatch Beers. 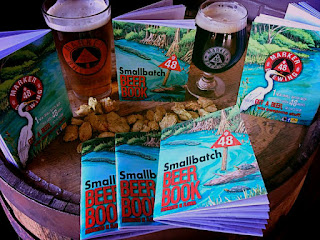 Most Smallbatch Beers will be released on Wednesdays, though some with special treatments or other special brewing techniques may be released another day. Each beer is expected to remain on tap for a couple of weeks, though that cannot be guaranteed. Check the Marker 48 Facebook page or Twitter accounts for announcements on the releases.

The first beer in the series was released on Sunday, Feb. 5. “Peanut Butter and Jellyfish” is a treated blonde ale that come in at 5.5 percent Alcohol by Volume and remains available as of this date.