When the Founders of the Winter Park Distilling Company unveiled expansion plans to combine their craft distillery with a fully functioning brewery, taproom and retail showroom, it was innovating, groundbreaking, and set to be the first of its kind in the State of Florida. Those plans were originally unveiled in 2015. Today, that plan and vision for “The Brewstillery” has been fully realized and patrons can visit the site, now home to The Bear& Peacock Brewery and the Winter Park Distilling Co. which has been in full operation since the grand opening in November 2016.

I was recently given a tour of the site by co-founder, Andrew Asher, whose enthusiasm and passion for craft brewing and distilling was on full display. The tour began in the brewery (which is separated from the distillery only by a government-mandated wall) where Asher gave an overview of the brewing process, focusing on the scientific nature of his five-barrel system. 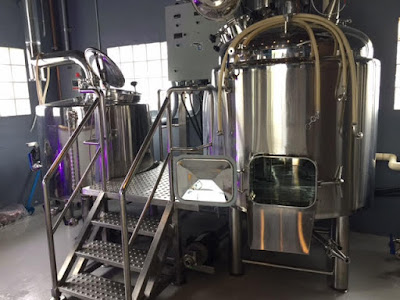 While I have been on more brewery tours than I can count, this tour was different. Asher’s presentation was fully engaging and enlightening. His love of Winter Park, craft beer, and craft liquor was inspiring. He intertwined Winter Park history into the tour and provided personal stories which gave light to his inspiration for opening the craft brewery.

The name, Bear & Peacock, for example is homage to Winter Park— “Bear” referring to a lake he and his friends used to hang out around, and “Peacock” referring to the bird found on the city’s official seal thanks to members of the Morse family who brought the first peacock to Winter Park in 1950. As Asher stated in his original press release announcing the brewstillery, “Our identity as a craft distiller is grounded in the unique beauty and creative drive of this community.” 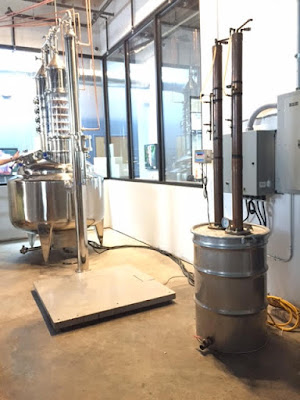 The second part of the tour took place through the opening of the wall and into the distillery side. Here is where Asher truly shined. It’s clear that the Winter Park Distilling Co. is Asher’s first love. Again, he provided an expansive overview of the process. Like a kid on show-and-tell day, Asher proudly displayed the 250 gallon still which sits adjacent to the smaller, home-made still with which he began. The tour also included a walkthrough of the aging area where barrels of rum and whiskey await their bottling day, and a humble side space which serves as an office, lab, and bottling room.

The tour concluded with, perhaps, the best part – the samples! To no surprise, Asher pulled out every bottle of liquor he had available; he generously shared a tasting of each spirit while giving even more backstory behind each one. Typically, the samples are available only to those who pay for a tour (scheduled by appointment only), but Asher pulled in the crowd and invited several others to enjoy – one final reminder that the Brewstillery is, at its core, grounded in community.

A few more shots from the tour: