Marker 48 Brewing announces the return
of the Smallbatch Beer Program

Released each Wednesday beginning Feb. 7, the 2018 version of this passport program
could lead to valuable prizes for the brewery’s customers

WEEKI WACHEE, Florida (Jan. 30, 2018) — For the second year in a row, Marker 48 Brewing will offer a promotion that will give participants a chance to win magnificent prizes at the end of the year, as well as pours of unique one-off beers throughout 2018.

The Smallbatch Beer Program proved to be such a success in 2017 that the brewery is eager to do it again.

“Oh my gosh, it was phenomenal,” said Cindy Halley, Marker 48 Brewing tasting room manager. “People who would only drink a cream ale or only drink an IPA or only drink a stout opened up their palates to drink more types of beer. Some they liked and some they didn’t.”

But, she added, “It helped them start venturing out and trying other beers.”

The Beers:  Our brewers and select guest brewers have committed to brewing 48 different small-batch beers, one new beer every week. 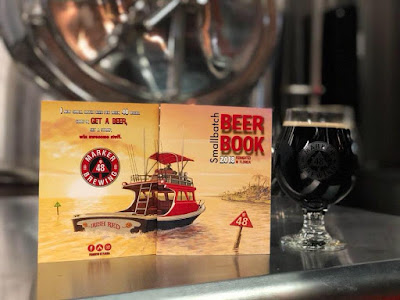 The books cost $100 each and are on sale in the tasting room, 12147 Cortez Blvd. (S.R. 50), Weeki Wachee, Florida, beginning Feb. 1. In addition to the 48 free beers, book holders will receive a stamp for each Smallbatch Beer drank.

The Prizes: At the end of the year those individuals who have all 48 stamps will get an exclusive Marker 48 Smallbatch Beer shirt AND a special 20 oz. glass to be kept in the brewery to receive pours core beers throughout 2019 for the same price as 16 oz. beers.

26-35 stamps are qualified to win all of the above, PLUS:


36-48 stamps are qualified to win all of the above, PLUS:
New for this year: All books with 48 stamps will be entered to win two VIP tickets to a 2019 Tampa Bay area beer festival of Marker 48’s choice, accompanied by either the owners or brewers.

You must purchase a Smallbatch Beer Book to receive the stamps and qualify for the prizes but you do not have to have a book to come in and order each week’s Smallbatch Beers.

The winners for the 2017 program were announced during a drawing on Wednesday, Jan. 17, and the grand-prize winner’s name is Debbie Garda.

In addition to the tangible prizes, there are other advantages to being a member of the Smallbatch Beer program, Halley said. In the inaugural year, a group of regular customers who purchased the passport books banded together to meet in the tasting room for each new release.

“So there’s a huge group of people who made lifetime friends by coming every Wednesday and trying all the new beers together,” Halley said. “So yeah, I would say it was a huge success.”

The passport books are currently on sale in the taproom, and the first beer in the program will be released Wednesday, Feb. 7.