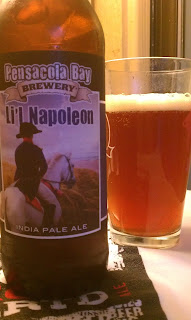 Continuing my exploration of Florida's finest, today's review comes from Pensacola Bay Brewery. This brewery is located in the heart of Pensacola's historic district. In fact, it's the city's first full-scale brewery since prohibition, and for a while, they were not actually allowed to sell beer on their premises. So, to get around the laws, patrons could buy the glass (empty) and receive free beer. Not a bad deal!

I picked up Li'l Napoleon from Total Wine in Jacksonville. This is actually my first taste of anything from Pensacola; so I was quite eager to give it a go!

The aroma is pretty mild. There are hints of hops on the nose, but there's nothing overwhelming. I was pretty surprised at how absent the aroma is given that it's an IPA--a style that usually has a strong aroma. 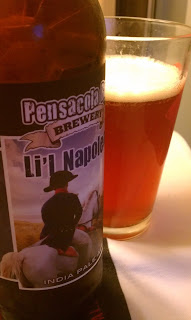 For everything the nose is lacking, the flavors make up. Li'l Napoleon is a citrus punch in the face. Lots of hop-bitterness, citrus freshness, and not a whole lot anything else (and that's not a bad thing). Very little sweetness or malt to speak of beyond the fructose-like-flavors that come from the citrus profile. The finish is crisp, clean, and slightly dry. Overall satisfying and exactly what I'm looking for in an IPA.

As I mentioned above, this is my first beer from Pensacola Bay and it definitely doesn't disappoint. Li'l Napoleon is just an old fashioned American IPA and that's all it tries to be. I appreciate the fact that Pensacola Bay Brewery didn't try to be too experimental with this. It's exactly what a solid IPA is supposed to taste like. It's hoppy. It's floral. It's refreshing. What more do you need from an IPA?
at 6:10 PM