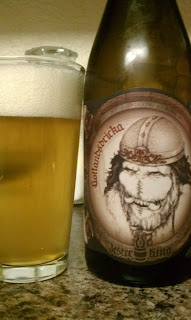 Jester King is Texas' premier brewer of farmhouse ales. They've put out a variety of creatively inspired beers in their short existence and have built quite a reputation for themselves nationwide.

I received this bottle from a couple of friends in Houston and have been curious to try it, though I didn't know too much about this beer. I checked out Jester King's site, and this is their description of Gotlandsdricka:


Gotlandsdricka, meaning “Drink of the Land of Goths”, is believed to have been the beer of the Vikings. Our rendition of this ancient style is inspired by the traditional farmhouse ales once brewed on the island of Gotland off the coast of Sweden. Gotlandsdricka (6.6% alcohol by volume) is brewed with birchwood smoked malt, juniper, sweet gale and rye. It’s unfiltered, unpasteurized and naturally carbonated through re-fermentation in the bottle.

This beer pours a light yellow hue that's slightly cloudy. It appears to be a light-bodied beer judging from the color and how rapidly the carbonation rushes to the top of the glass. 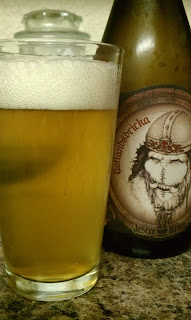 The aroma is spicy--like a solid witbier. It's earthy and yeasty.

I'll admit, I was immediately turned off after the first sip. The birchwood smoked malt that Jester King brewed this beer with is over-powering and completely takes over. All of the flavors I was expecting to taste from the nose play second fiddle to the deep smokiness of this beer. To make matters worse, the body is so light that as the beer warms, it starts to taste a little skunky.

Unfortunately, the flavors just don't work in this. Although I was able to get past the smoked malt after about half a glass, sadly I didn't even enjoy the flavors that are beyond the smoke. If this is what the Vikings drank, than there's no wonder why they were so aggressively seeking new lands...likely in search of a new beer recipe.

This one's not for me, but I appreciate what Jester King does and look forward to trying more of their beers.
at 9:03 PM