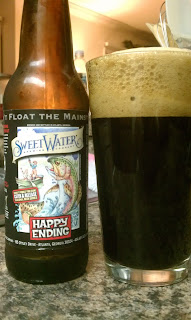 Ever since I was a little boy, I have been a fan of happy endings. The first movie I ever saw in a theater, An American Tail, was about a mouse who gets lost but is eventually reunited with his family--happy ending. My first fight came in the fourth grade when Adam, a weasel-of-a-friend, sucker-punched me in the locker room while I was pulling my shirt up over my head. A few years later, Karma gave Adam a case of the herpes--happy ending. And then there was that time when I went to prom...well, you get the pattern.

Given my experience with happy endings, I was naturally drawn to this one by Sweetwater. I really enjoyed the last beer I had from them and have been looking forward to this!

I think I got a little giddy as I poured this one into the glass. There's something about a pitch-black beverage that excites me every time. Despite a gentle pour, there was a large, untamed, head that formed (seems oddly appropriate given the name of the beer). Too far? 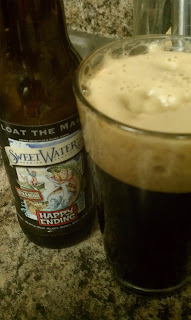 The aroma is vibrant with lots of citrus--likely from the cascade hops with which the brewery dry-hopped the beer. This is a great example of why you cannot judge a beer by its color. I expected to get a lot more roast and chocolate on the nose and there is next to none of either. It smells a lot more like an IPA than it does a traditional stout.

The flavors are excellent! This is a two-faced beer that will please both hop-heads and stout-lovers. There is a nice roasted malt profile that balances the pine and grapefruit flavors of the hops. I would also point out that this stout features a nice smokiness somewhere in the middle of the palate.

This stout has a bitter and slightly boozy finish that is expected with the ABV and hop profile. And like all great stouts, this is a full-bodied beer. Great mouthfeel.

Happy Ending is quite creamy. But then again, aren't they all?