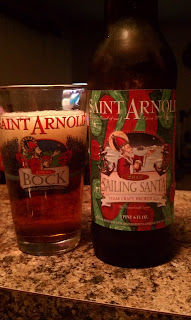 I moved to Houston right out of college in 2007 and "craft beer" was not anywhere on my radar. Once settled, there were two Texas breweries that I took a liking to: Shiner and Saint Arnold. Both have important places in my beer journey, but I credit the latter for my love of craft beer.

Unfortunately, craft beer can be expensive and I was just a budding professional on a humble teacher's salary. Luckily, Saint Arnold held affordable $5 brewery tours every Saturday (the brewery has since moved locations, grown significantly, and now holds daily brewery tours for $7). It was at these tours that I began learning about hand-crafted beer; and it was there, in the middle of their brewery tour, standing beside a few hundred pounds of barley, that I became a born-again beer drinker.

Now that we've gone down memory lane and tears have all but dried on my cheeks, let's get to today's review.

Sailing Santa is a seasonal blend of their Elissa (IPA) and Christmas Ale. The beer pours a nice copper/amber color. The head thins quickly and leaves a minimal lacing around the glass.

The aroma is a great blend of sweet malts and earthy hops. Given that Saint Arnold has labeled this beer as an IPA, I would say the aroma is a bit incongruent to the typical aroma of an IPA.

This beer is malt-forward. Again, I think it's mislabeled. The taste and aromatic profile fit more as a winter warmer in my opinion. The front flavors are all malt, caramel, toffee, and maybe a little maple syrup. The hop profile from the Elissa IPA portion of the blend are mild and subtle. Pine sneaks in towards the finish of this, which is also a tad dry. I do pick up on the cinnamon that was apparently added to the 2012 version. It's a pleasant flavor that lingers nicely.

Overall, this is a solid winter beer, but it's just not an IPA. I understand that Saint Arnold wants to capitalize on the blend which uses Elissa IPA, but it disappoints if being compared to true IPAs. Style aside, this is an enjoyable blend that's highly drinkable and perfect for the season. As I said above, this reminds me more of an earthy winter warmer. I appreciate the subtle hops in this beer, but the prevailing flavors are the heavier malt profiles and warming spices.
at 10:54 PM