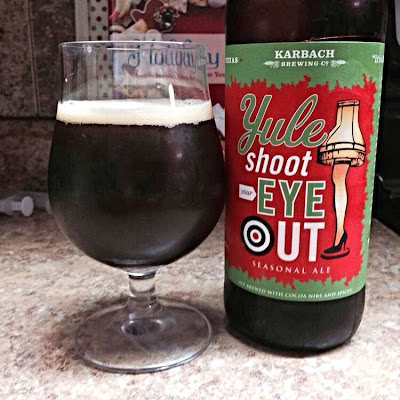 Yule Shoot Your Eye Out is big beer that shows the brewery's humorous side. It's name is inspired by a Christmas classic and, like the film, it's sure to become a seasonal tradition for many.

Karbach is a brewery that was still in its infancy when I moved out of Houston in 2011. Even at that time, I remember being impressed with their first couple of releases, specifically Sympathy for the Lager and Rodeo Clown Double IPA.

Now that I live in Florida, I no longer have the privilege of tasting their beers on a regular basis, and I was about the opportunity to get my hands on Yule Shoot Your Eye Out (special thanks to @discipleofhops for sending a bottle last year) via a trade. 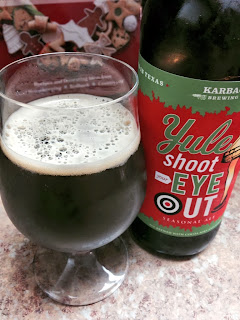 Appearance: Very dark brown. I thought it was black at first, but realized it's actually a clear dark brown once I held it to the light. There's a nice thick head that forms and remains.

Aroma: Oh, this is a real treat! Lots of fall and winter spices like caramel, chocolate, nutmeg, ginger, and anise. The anise is particularly pleasing to the nose!

Taste:  The flavors are incredibly profound and complex! The dark chocolate, toffee, and molasses stand out on the palate and create a pleasant sweetness with a bitter finish. The holiday spices are prominent but not overpowering. This is one of the few seasonally spiced beers that I could drink year-round. The ginger, cinnamon, and nutmeg pair very well with the bitter-sweet flavors of this stout-like ale. And to round everything out, the piny hops make an appearance on the finish and linger nicely on the aftertaste.

Overall: Delicious, complex, big-bodied, bold-flavored, seasonal ale. There's not much I don't like about this beer. Now, this particular bottle has been in my cellar for a year, so I don't know if the beer is this balanced and complex fresh. But judging by how this one performed, I definitely recommend cellaring a bottle or two if you can.

This was a wonderful way to end my Christmas celebrations.

Merry Christmas to everyone and a Happy New Year! 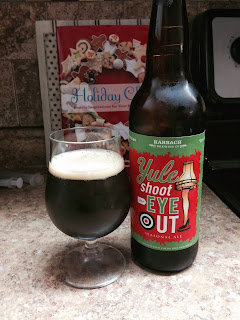