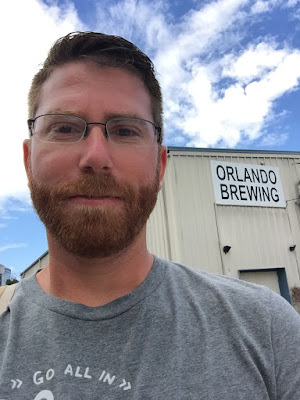 A lot has happened since my last post. I've successfully relocated myself and the family to Orlando, where we hope to be for the foreseeable future. Settled and ready to get back at it, I figured it was only appropriate to have my first Orlando-based review come from Orlando's Organic craft brewery: Orlando Brewing.

The brewery is located in an industrial area near downtown Orlando in a fairly unassuming building. The taproom is a dimly lit area (more on that in a minute) with a small bar, a dozen or so tables, and a stage area for live music and entertainment. There is also a back room that provides some more space and an area for darts.

Mariah was the bartender on duty during my visit, and she was quite welcoming, knowledgeable and friendly. After I told her that I was new to the area and this was my first time, she recommended two "flagship" beers, Right on Red and I-4 IPA (both of which I selected to be in my flight sampler).

The dim lighting is the worst part about the taproom and makes it hard to see and appreciate the color and/or clarity of the beers. As you can see from the pictures, it's nearly impossible to gauge the appearance of the beers. I'm sure the lighting works great for the live entertainment that comes through the taproom, but it's really a bummer for someone like me who appreciates more than just the flavor of the beer I'm drinking. But enough about lighting, let's get to the beer. 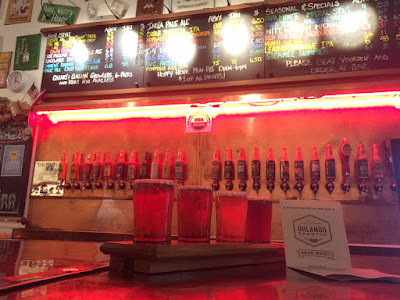 Right on Red
Mellow and drinkable red ale. Very balanced with some sweetness coming on the front and bitter notes on the back, followed by a bit of dryness. Overall, this is a malty amber ale that's easy to drink is likely a crowd-pleaser. For a flagship ale, this is quite generic and drinkable...but unfortunately, it's also forgettable. Grade:C

I-4 IPA
I-4 IPA has a citrus kick on the nose and on the front of the palate. I get lots of grapefruit, lemon, and orange zest before the beer mellows out with a smoother finish. There is some lingering hop bitterness, but nothing too strong. The brewery describes this beer as a "Full bodied West Coast style IPA." I have this beer down as a medium-light bodied IPA, but do think the hop profile lends itself nicely to the style. I can see why this is their best selling IPA. Grade: B 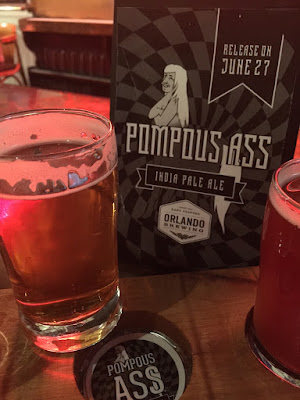 Released just four weeks prior, Pompous Ass is one of the newest additions to the taplist. And it's one sweet ass beer! Tropical fruit flavors followed by subtle malt notes and finishes with some citrus bitterness. Tropical aroma, sweets, and bitters. As the beer warmed, I got a taste of some Belgian spices that were overshadowed by the initial hop flavors, but not nearly prominent enough to describe this as a Belgian IPA. If you don't mind your IPA being on the sweet side, this is the beer for you. Grade: B

Doble Imperial IPA
Gotta tip the hat to Orlando Brewing for brewing a beer in honor and memory of Tampa Bay Brewing founder John G. Doble. Love seeing some beer love being shared from one brewery to the other. Doble packs a (balanced) punch. The beer is malt-forward, ending with heavy hop notes and booze. Like many Imperial IPAs, this is a full-bodied, full-flavored beer. Doble is balanced without compromising on the malt sweetness or hop bitterness. I found this to be the best beer of the four I tried and the one I would order again. Grade: B+

To see more from the Beer Apostle, be sure to check out the Archives section! Have questions or feedback, contact me and share your thoughts! And don't forget to join in on the discussion by following  on Twitter and Facebook!
at 5:50 PM