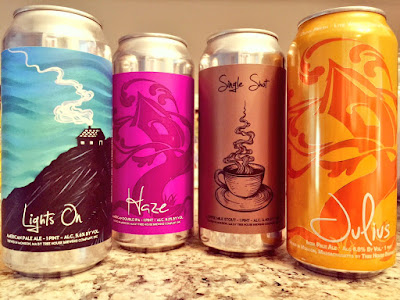 This is a continuation from a previous post where I sampled Julius. The bar has been set high, and I am excited to share my tasting notes from the remaining three Tree House Beers that I recently received. 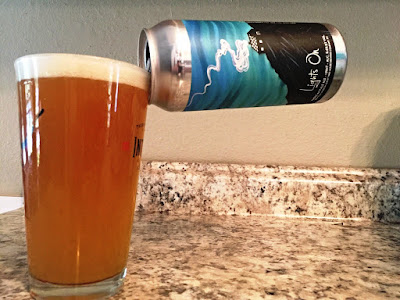 Being that this is only the second beer I've ever tasted from Tree House, my only point of comparison is Julius--two radically different beers, and yet, I found some obvious similarities that show a distinct craftsmanship from the brewers.

Strong and pleasant aroma--strong hop notes and a subtle orange peel aroma as well. As you can see from the image, the beer poured a thick hazed pale-orange color. Not as vibrant as Julius, but a similar haze and orange aroma.

Lights On tastes of grapefruit, orange zest, lemon, mango, and other tropical fruits. This is a very flavorful and citrusy pale ale that packs a balanced bitterness, making this an approachable and highly drinkable beer. It's not quite as juicy as Julius, but one could argue this beer had more going on in terms of depth/layers of flavors. 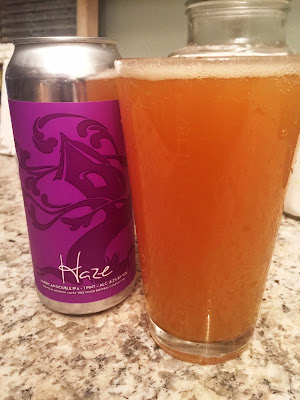 Similar to the previous two beers I've sampled, Haze is...well, hazy. This beer pours an almost identical color and "thickness" to Lights On and Julius. The aroma is similar as well: tropical fruits and some citrus zests dominate the nose.

On the palate, Haze begins with notes of orange, lemon, and pineapple. There's not much of a hop bitterness here, and I enjoy the more prominent malt presence that's in this beer. Still, there is a clear theme going on with Tree House's IPAs: they pack a punch of juicy (often tropical and citrus) flavors. Haze tips the scale more on the tropical side of the scale, but the signature orange flavors are certainly there.

Also noticeable is the heaviness of this beer. I found Haze to have almost a "chewy" feel to it: quite thick and juicy--but that is definitely not a knock on the beer in any way. As an imperial IPA, Haze does not disappoint and provides the flavor and mouthfeel to satisfy the genre. 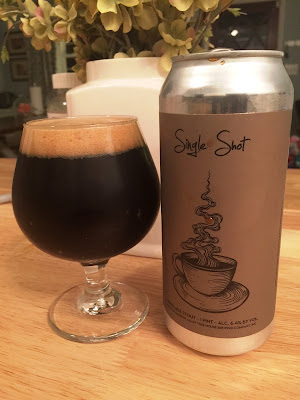 I was excited to try this one as it was so very different from the previous three that I sampled. There was such a clear theme and pattern detected in the pale ales, that I was curious to see what Tree House would do with a stout.

Single Shot is labeled a Milk Stout or Sweet Stout, depending on which site you're looking at. Either one works well in my opinion. As soon as I cracked open the can, I was met with a sweet coffee aroma, something similar to a cafe con leche.

If you are someone who likes their coffee with lots of cream, this beer is for you. Single Shot tastes of rich coffee and sweet cream flavors. There is a hint of chocolate in the middle, but this beer doesn't shy away from being a sweet coffee stout and nothing else. The finish is very smooth. There's absolutely no bitterness from hops nor coffee. This is a rich and smooth, sweet and bold stout. I would love to try this one on Nitro and have a nice creamy texture to go with the sweet cream flavors.

After tasting four different Tree House beers, it's clear that those of us who live in Florida are missing out on some well crafted beers! I thoroughly enjoyed each one and have to thank Nine State Brewery one last time for sharing these beers with me. Be sure to check out Tree House Brewing Co by visiting http://treehousebrew.com/ and show some love to Nine State by giving their facebook page a Like!  https://www.facebook.com/ninestatebrewery/